The company report that Tesorito hole TS-DH09, the first hole ever drilled into the northern Tesorito anomaly, has provided strong support for a northern porphyry system to be present at a similar depth to the southern porphyry core encountered in TS-DH08, 350m to the south.

TS-DH09 was broadly designed to determine underlying lithologies and porphyry vectors and it successfully intersected a broad intercept of 360m grading 0.39g/t gold from surface, passing through country rocks similar to those encountered in the southern zone porphyry wall rocks.

The mineralised zone had elevated porphyry pathfinder elements and many similarities to the Southern Tesorito were observed:

- Broad interval of low grade gold mirrors the result of the discovery hole into Tesorito South which has subsequently vectored into the higher grade core;

- Elevated sericite and potassic alteration, porphyry style mineralisation and high temperature hydrothermal features observed from 141m depth, at approximately the same elevation as the top of the Tesorito South porphyry.

The drill profile and extended low grade intercept bears strong similarities to drill results from the periphery of the southern anomaly core.

A zone of andesite (and breccia - not shown) with strong potassic alteration overprinted by chlorite-sericite alteration was encountered ‘mid hole’ in TS-DH09 and suggests proximity to a causative heat source such as a porphyry. 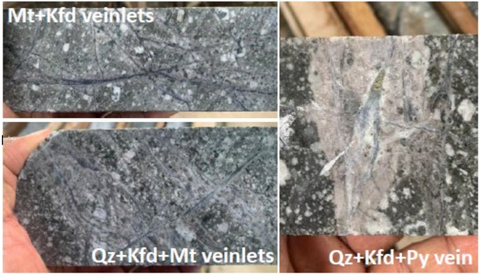 Los Cerros’ Managing Director Jason Stirbinskis commented, “The alteration, mineralisation, textures and presence of porphyry associated element signatures such as elevated molybdenum and copper has all the hallmarks to suggest we have passed near to the causative heat source, a potential porphyry, around the above mentioned 157m wide zone starting at 141m depth.

“It is probably not coincidental that the RL (elevation) of this encouraging intercept is the same as the southern porphyry core which may suggest that this was the regional level of emplacement of the porphyry(ies) at Tesorito.

“It is also encouraging that the intersection in hole TS-DH09 mirrors the first hole drilled into the southern Tesorito anomaly TS-DH-01, which recorded 339.5m @ 0.39g/t gold from 10.5m (uncut).

“All these factors bode well for locating a northern Tesorito causative porphyry(ies) in follow up holes. We plan to follow this up as soon as practicable in the current drill campaign, and planning for this has already commenced." 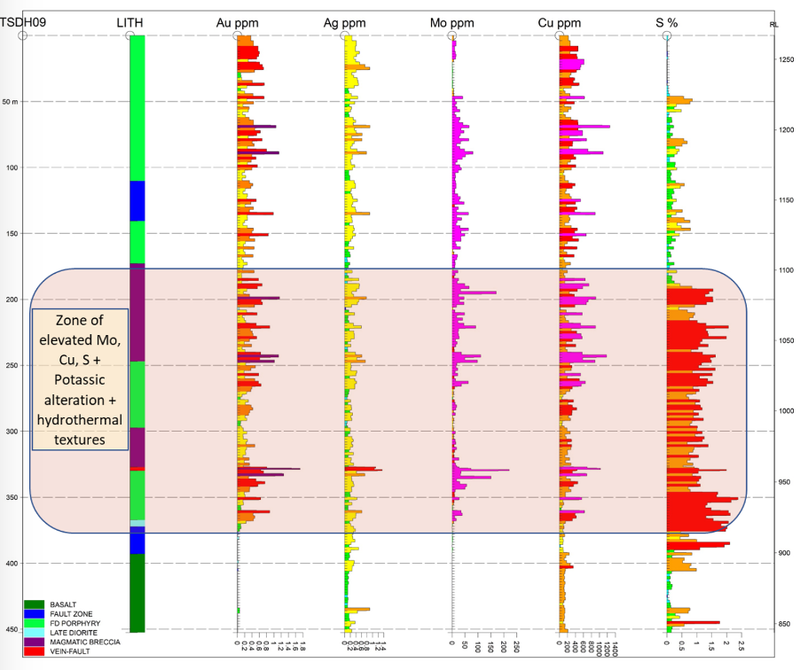 Strip log of TS-DH09. A wide zone displays compelling indications of having passed near a porphyry core or similar intrusive body

Encouraged by this first scout hole into the northern Tesorito anomaly, the company is now finalising planning for further drilling of the northern target in the campaign.

In the first instance, a follow up drill hole is likely to collar from the same pad as TS-DH09 and drill to the SE targeting the untested peak of the gold and molybdenum soil anomaly or SSW targeting the centre of the local magnetic anomaly.

Th current (third) drill hole, TS-DH10, is ongoing, testing the eastern and north eastern extent of mineralisation and target the porphyry core below the intersection recorded in TSDH08 and to the east.

Los Cerros has a dominant position within the Andes and Quinchia regions of the Mid-Cauca Gold belt of Colombia.

Within three kilometres of Miraflores is the Tesorito near surface porphyry where the company is currently drilling.

Also in close proximity, is the Chuscal target where a maiden drilling program was completed in January 2020 and drilling is scheduled to recommence in October 2020. 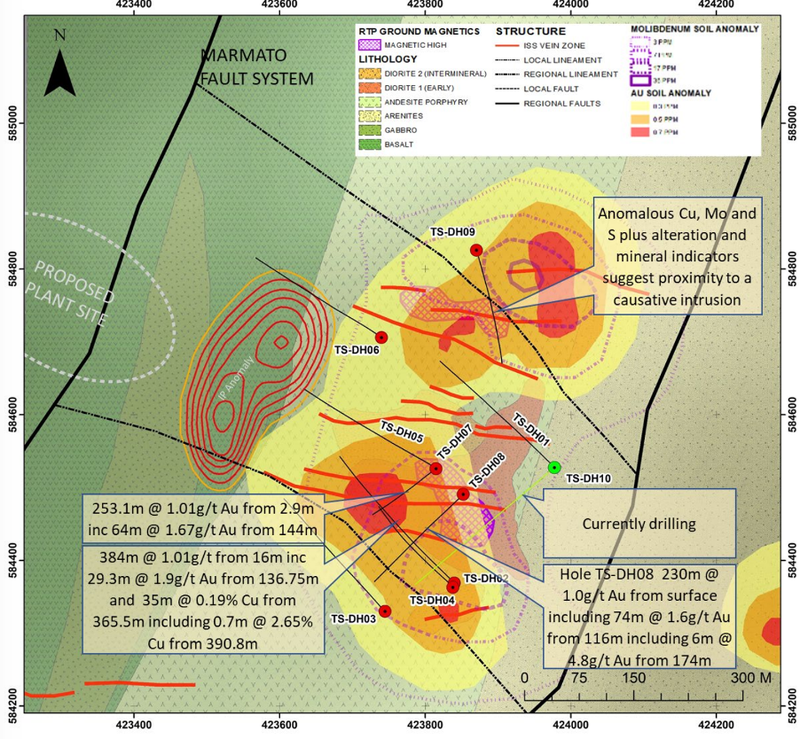