Los Cerros Limited (ASX:LCL) has released impressive news in relation to exploration at its Tesorito South porphyry target, part of the Quinchia Project in Colombia.

In effect, it is five drill holes for five outstanding results, all delivering data that increases confidence regarding Tesorito South’s potential.

Given the multiple successes across just five drill holes, it wouldn’t be surprising to see Los Cerros trade strongly today.

Firstly, promising assay results have been received for drillhole TS-DH15, most prominently 215 metres grading 0.86 g/t gold from 110 metres, including 34 metres at 2 g/t gold and 0.1% copper from 214 metres.

In somewhat of a milestone, the company-owned diamond drill rig completed a 690 metre hole at TS-DH16, passing through the target porphyry suite before entering another porphyry zone from 576 metres, making it the deepest hole ever drilled at Tesorito.

TS-DH17 and TS-DH20 were designed to test to the SSW and SSE for mineralisation extensions.

Assays are pending, however management now has considerable confidence in the 3D geological model and, based on visuals alone, both holes are described to have intercepted target porphyry units as expected before hitting the Marmato Fault zone at around 240 metres and 260 metres respectively before leaving the system.

Assay results that are expected in early April could provide some valuable information on extensions in this region.

Arguably the most outstanding development from the five drill holes (TS-DH21) is the likely intercept of the cap of the porphyry core (cupola).

Importantly, gold was visible in this intercept, extending the zone by 90 metres to the north-west.

The gold that was visible is shown below, and it occurred at a depth of approximately 132 metres. 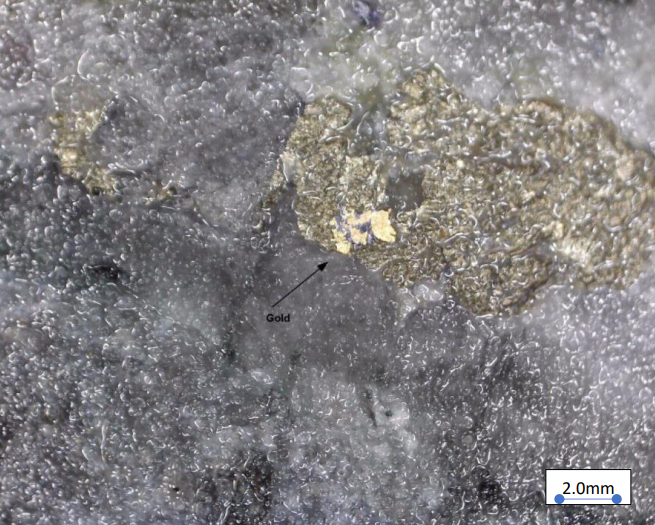 The strategy behind the targeting of this hole is interesting as it was drilled directly eastwards to cut across potential northern extensions to the high grade zone under the pads of TS-DH07 and TS-DH08, both of which generated some of the best intercepts to date.

However, the most significant part of this story is yet to unfold as the porphyry cap that appears to have been identified often carries the highest gold grades with elevated levels of copper.

Pointing to the significance of upcoming assays for TS-DH21, managing director Jason Stirbinskis said, “It is very exciting that we hit what we believe to be the cupola again, some 90 metres north-west of where we first reported the cupola in TS-DH08, which sparked the market enthusiasm for our Tesorito porphyry discovery in September last year.

"We eagerly await assays, expected to be received in April.”

TS-DH15 bringing together an interesting picture

TS-DH15 is shaping up as a prominent source of mineralisation as the results released today build on what was already an impressive story.

The hole was commissioned approximately 60 metres further west and in the same drill fence as TS-DH11 given the strong gold values of TS-DH11 ‘mid-hole’ and further boosted by the more recent spectacular results of TS-DH14 (320 metres at 1.5g/t gold from 2 metres), pushing high grade westward at depth.

As shown below, this has extended the high-grade gold zone, and therefore potential volume of high-grade material, for an additional 75 metres west and down-dip. 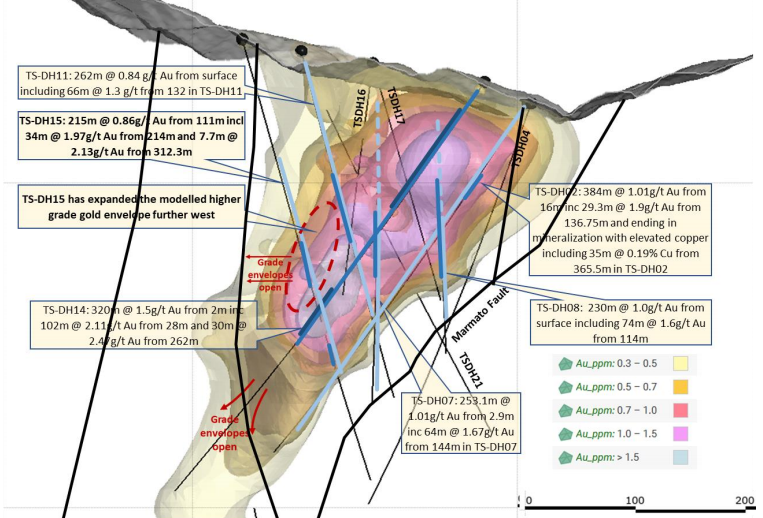 Elevated copper content occurs as fine-grained chalcopyrite associated with zones of higher vein density near contacts within the porphyry and breccia.

This is consistent with elevated copper grades reported in previous holes such as TS-DH02 and TSDH08.