Drilling results are in for Navarre’s Stawell Corridor Gold Project

Navarre Minerals (ASX:NML) today provided an update on the drilling progress at the Stawell Corridor Gold Project, where the company recently re-commenced drilling.

Navarre has now received first results from diamond and air-core drilling for two prospects within the project that demonstrate the growth potential of the project and enhance the potential scale of its mineralised systems.

The company is searching for large gold deposits in an extension of a corridor of rocks that host the 5Moz Stawell and 1Moz Ararat goldfields – “The Stawell Gold Corridor”.

A key feature of major gold deposits along the Stawell Gold Corridor is that they are hosted in meta-sediments on the margins of Cambrian basalt domes. The 4Moz Magdala gold deposit at Stawell is the best example of this style of mineralisation. 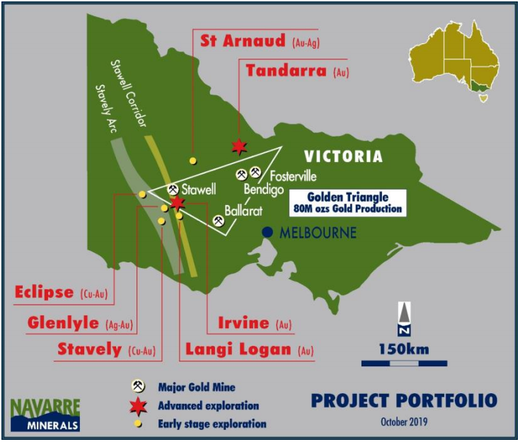 The Stawell Gold Corridor has significant regional potential, as demonstrated by Navarre’s discoveries at the Irvine and Langi Logan prospects where gold is proximal to large basalt dome structures. Navarre has identified seven basalt dome structures within the company’s 60km long tenement package to date.

In mid-October 2019, the company commenced a 16,000m drilling campaign comprising:

The drilling program has initially focused on testing depth extensions at the shallow Irvine gold discovery as well as testing priority targets identified at the Langi Logan prospect.

The Irvine basalt dome is Navarre’s most advanced prospect. Previous drilling has confirmed extensive shallow gold footprints at the Resolution and Adventure lodes with a combined strike length of 2.9km along the eastern contact of the Irvine basalt dome.

Navarre is now testing the depth extents of the gold shoots at both lodes down to approximately 300m below surface through a 6,000m diamond drilling program.

Two diamond drill rigs have been operating since mid-October 2019: one at Adventure Lode and, the other, at Resolution Lode. During this time, a 1,000m air-core (AC) drilling program to expand the known mineralised strike of the Resolution Lode has also been completed.

Navarre report that down-plunge extensions of gold mineralisation was confirmed at each of the Resolution and Adventure lodes, with first the three deeper diamond holes confirming gold mineralisation continues to at least 300m depth, and remain open.

Drilling to date confirms the mineralised quartz–sulphide structures occur in geometries similar to the gold shoot patterns of the on-strike 4Moz Magdala Gold Mine.

Shallow air-core drilling at the northern end of Resolution Lode provides evidence of a potential new gold shoot which will now be assessed with diamond drilling. A best result of 9m @ 2.1 g/t Au from 6m was returned. 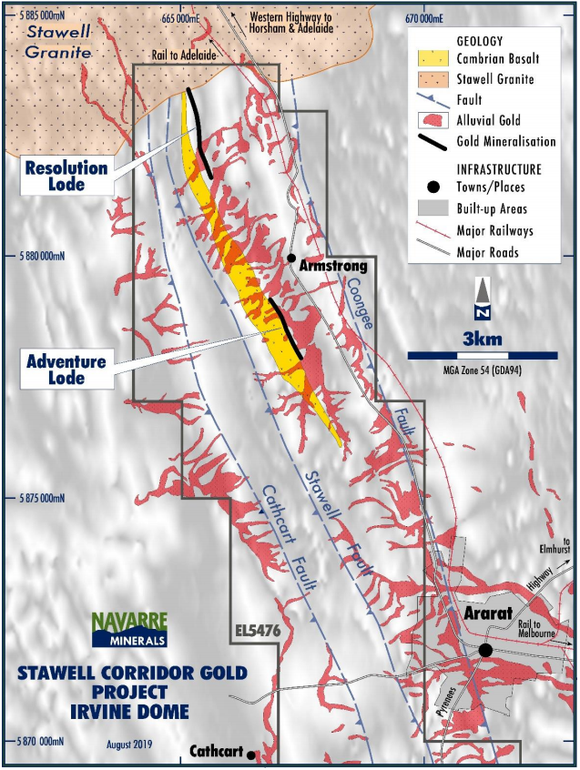 The Langi Logan basalt dome is the next major prospect for Magdala style mineralisation south of the Irvine basalt dome within the Stawell Corridor Gold Project.

It consists of the Langi Logan North, Langi Logan Central and the Langi Logan South Cambrian basalt domes with a combined 12km strike length and occurs in an area of significant historical Deep Lead production (133,000oz of gold recorded).

First results from an ongoing 10,000m air-core drilling program testing multiple priority targets on the prospective margins of the Langi Logan basalt dome have been received.

A highlight intersection of 1m @ 21.2 g/t Au confirms shallow high-grade gold mineralisation over a strike length of 650m at Target A for follow-up diamond drill testing. 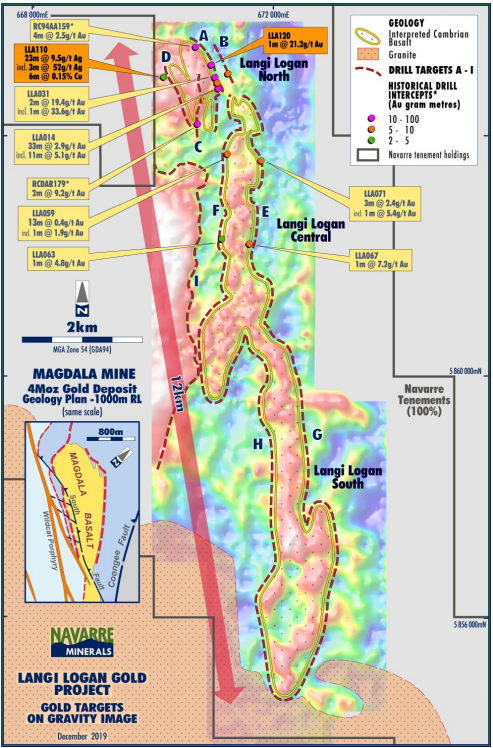 The company notes that with five drill rigs active across Navarre’s Victorian gold and base metals properties as part of its 50,000m drilling campaign, it expects to deliver strong news flow in 2020.