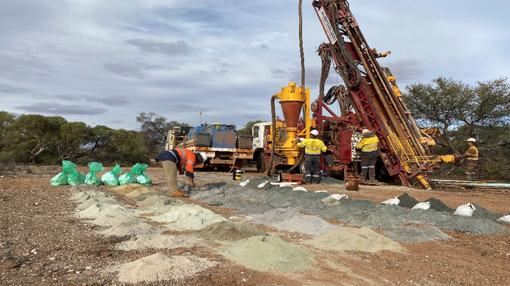 Due to the encouraging geology observed during drilling, management has pegged an additional Exploration Licence E36/1015 adjoining its current licences E29/1053 and E36/0979 forming the Ida Valley Project.

The initial program consisted of 11 RC drill holes IVRC001 – IVRC011 for a total of 990 metres with all holes being drilled into the northern target area, testing gold-in-soil anomalies A and B.

Drill-holes IVRC001 to IVRC006 tested anomaly A, highlighted by peak soil assays of 884ppb Au and rock-chip assays results up to 6.6g/t Au.

From a geological perspective, ultramafic rocks are located at the western margin of magnetic amphibolite that is the source of the distinct magnetic anomaly and appears to be an intrusive rock.

Drill-holes IVRC007 to IVRC009 were drilled as an east-west traverse across the magnetic rock unit while IVRC010 and IVRC011 were drilled to test anomaly B, defined by results from auger samples up to 52ppb Au and rock-chips to 0.99ppm Au, located on the eastern side of the prominent magnetic amphibolite.

Drilling has revealed the presence of vertical shear zones containing altered sulphidic rocks of similar nature to those at anomaly A.

A total of 249 composite (4 metre) samples were collected along with 33 QA/QC samples that have been submitted for gold assaying.

Assays from drilling are most likely to be received in June - a much-anticipated development as it could be a catalyst for a rerating given the gold-rich nature of the broader region.

The following map shows the location of the Ida Valley Project, positioned in the midst of numerous multi-million ounce deposits. 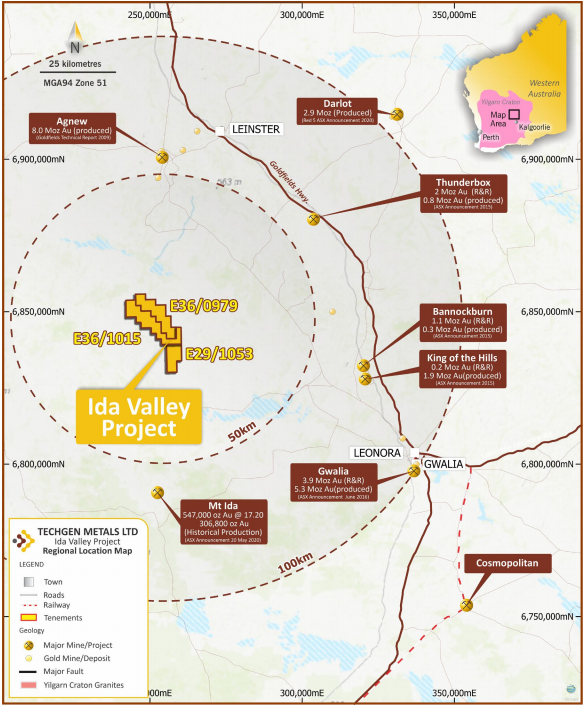 As flagged earlier, management is happy with its initial observations at Mount Ida, resulting in a decision to extend its territory in that region to nearly 200 square kilometres.

Commenting on these recent developments, managing director Ashley Hood said, “It’s exciting to see a grass-roots project advance essentially from a blank canvas, in particular in an underexplored area between well-known mining districts.

‘’The assay results from the 4-metre composite samples are eagerly awaited, although still approximately 5 to 8 weeks away then followed by submission of 1-metre interval samples to precisely define the tenor of any mineralisation.

‘’Additional fieldwork to explore further-extensions of the greenstone belt that is under cover is currently being planned.

‘’We anticipate additional RC drilling, to test already defined targets along with new targets currently being developed at varying stages throughout this year”.