Shares in Lucapa Diamond Company (ASX:LOM) have hiked more than 30% in early trade as it announced more large diamond finds at its Lulo project in Angola.

It told the market this morning that so-called ‘large special diamonds’ had been found during a pitting program at the prolific Block 8 at the project – including a 90.32 carat gem.

That particular find was the largest found by LOM since alluvial mining started at the project in January this year.

The finds were on the same block where a 131.40 carat diamond was found during preliminary bulk sampling back in 2012.

The recent finds now make a grand total of 31 special diamonds from the block since mining started in August.

The current finds have investors excited this morning, sending its share up by over 30% for the day.

LOM is the operator of the 3,000km2 Lulo Diamond Concession in Angola’s Lunda Norte diamond heartland.

Lulo is located within 150km of Catoca, the world’s fourth biggest kimberlite diamond mine, and on the same favourable geological trend (Lucapa Graben).

Lucapa and its partners commenced alluvial diamond mining operations at Lulo in January 2015. The Lulo alluvial diamonds sold to date have achieved average sale prices of A$1668 per carat.

Lulo also hosts 296 kimberlite targets in two separate provinces, of which 96 have already been classified as proven and probable kimberlites and four confirmed as diamond-bearing pipes. 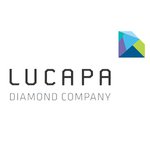