Headlining the results were cobalt grades of up to 1.46% and copper grading as high as 31.2%.

Robust gold and silver mineralisation was also identified, as indicated in the following results summary:

As a backdrop, these sampling results were taken as part of DLC’s 90-day due diligence option, which was negotiated when the proposed acquisition of the Highline Project was announced in mid-September.

Completion of the acquisition would see DLC achieving its goal of diversifying its operations, with a view to capitalise on the mounting demand for battery minerals such as cobalt, lithium and vanadium, which has seen the rapid rise in the LME price of cobalt (from US$23,000/ton in March 2016 to US$58,000/ton in October 2018).

Of the seven samples that were taken, all except DHGH011 were from the Highline Claim Group, while one sample was from the Pocahontas claim.

This sampling confirms the results of previously reported work by the vendor.

The sampling produced cobalt results of up to 1.46% and copper results up to 31.2%, as well as containing significant gold and silver mineralisation grading up to 2.22 g/t and 35.6 g/t respectively.

Samples DHGH001 to 003 were taken from mullock at the Highline portal, and samples DHGH004 to 006 are from prospecting pits and mullock piles above the main Highline portal. Sample DHGH011 was taken of mullock from an adit at Pocahontas.

A photo-geological interpretation was also completed, as illustrated below, providing a better understanding of the geology of the broader Highline Claim Group in relation to the regional geological setting. 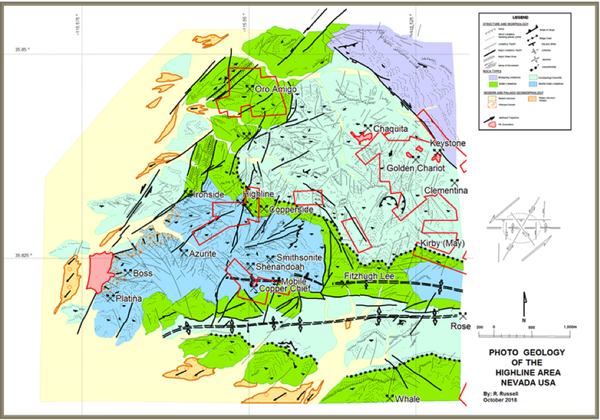 Further work on the ground will assist in correlating features at surface and underground with the photo-geological data.

Emphasising the extent to which these results have buoyed the company’s confidence regarding the project, managing director, Malcolm Day, said. “I am very pleased with the results from our sampling as they confirm the results from the vendor’s sampling and demonstrate the high grade nature of the mineralisation.

“Given the Highline mine’s previous mining and exploration was circa 100 years ago, the company believes that the Highline Cobalt-Copper Project represents a relatively low risk opportunity in an area of known mineralisation.”

As indicated in the map below, this is a proven area of mineralisation with a history of high-grade deposits and robust production: 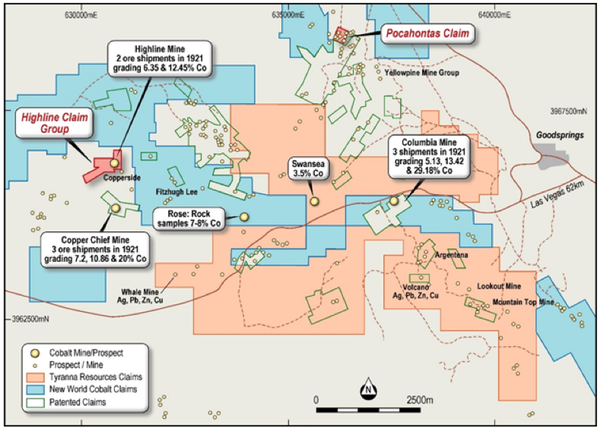 The Highline Claim Group themselves were mined between 1917 and 1921, producing 132 tons of copper at an average grade of 35% — the highest grade in the district — from 477 tons of ore.

The Pocahontas Claim lies less than a kilometre to the north of the largest zinc-lead-silver producer in the district — the Yellowpine/Prairie Flower Mine that started out as separate mines but was later joined by underground workings. It produced a total of 45,607 tonnes of zinc, 24,358 tonnes of lead, 36.6 tonnes of copper and 1.4 million ounces of silver from 185,866 tonnes of ore between 1906 and 1928.

The Yellowpine Mine was mined intermittently up until 1949, but no further production records are available.

It is worth noting that the metal produced was proportionately very high compared with the ore processed, and this should be kept in mind when considering the prospects of employing modern day drilling and processing equipment.

The information released today is likely to be the forerunner of further vital data at Highline as results from geological mapping and sampling from both underground workings and prospecting pits come to hand.

Delecta will also be undertaking stream and soil sampling, testing the extent of the mineralisation with a view to determining whether any other geological boundaries, contacts or structural zones could potentially host mineralisation.

Should positive data come to hand from this program, management said it may undertake further geophysical examination of target extensions or blind mineralised zones.

With regard to Pocahontas, geological sampling and soil sediment sampling will be completed to define the extent and potential of the anomalous horizon.

Interestingly, shares in Delecta increased some 50% when the proposed Highline acquisition was announced in September, and the recent retracement (as indicated below) appears to be mainly a function of negative sentiment due to intense market volatility in October. 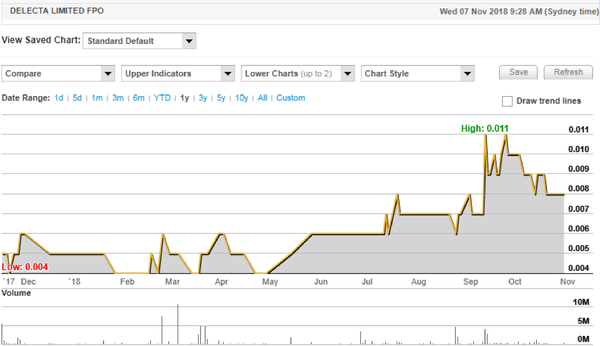