Dateline Resources Ltd (ASX:DTR) is well-positioned to achieve its goal of establishing a maiden JORC Resource at its Gold Links Project in Colorado in 2019 after raising $14.5 million.

When management reaffirmed this outlook in delivering its quarterly activities report on April 30 the company’s shares spiked 50%, and as exploration news comes to hand in the ensuing months further share price momentum is on the cards.

The funds will be used to examine an exploration target ranging in size between 520,000 tonnes and 650,000 tonnes. 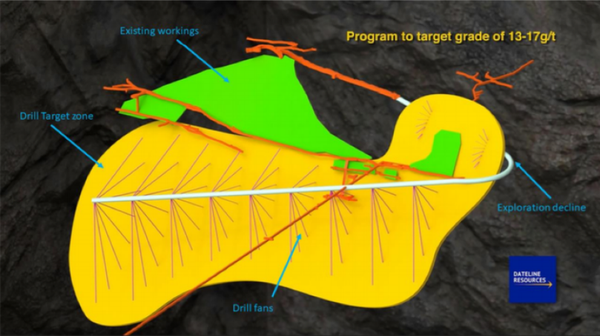 Other positive news included in the March quarter update when management’s comments in relation to the undertaking of desktop studies and detailed plans for a drilling program aimed at further de-risking the project.

The proposed project has been the subject of previous mining and exploration which has established that Gold Links hosts extensive, shallow high grade mineralisation.

Dateline’s exploration program will be the first time that the targeted area has been exposed to a widespread systematic exploration campaign using modern techniques.

Executive director Mr. Stephen Baghdadi said, “With the project now consolidated under a single ownership, with all the tenements on freehold land and a fully-funded exploration program set to go, we are on track to meet our goal of establishing a maiden JORC Resource in the December quarter of this year.”

Dateline will be undertaking a relatively simple cost-effective strategy by exploring for more gold directly below and in between areas where gold has previously been found.

While step-out drilling could identify mineralisation outside the core orebody, management’s decision to initially adopt a relatively low-cost measured strategy appears to be an astute approach at a transitional stage in the company’s progress.