Dateline goes back to the future to resurrect Colosseum

The Colosseum mine is located in San Bernadino County, California, and Dateline announced its acquisition in March 2021, and management has since been reviewing the various historic reports and data for the project.

The Colosseum Gold Mine was originally discovered in the early 1970’s with production of approximately 344,000 ounces of gold occurring between 1988 and 1993 from two open pits.

At the time of closure, the gold price was at a cyclical low of less than US$350 per ounce, and consequently there hasn’t been any exploration undertaken at the site over the past 25 years.

BP’s wholly-owned subsidiary Amselco LLC carried out the historical exploration program at the Colosseum Gold Mine prior to the introduction of the JORC Code.

The exploration work and reserve estimates were completed to a high standard and independently reviewed by an outside firm but cannot be relied upon for reporting mineral resources or reserves.

The following is a photo of the current open pits at Colosseum, and while there are no guarantees of future exploration success or development, the previous work completed on developing the open pit is obviously substantial.

BP defined a resource for Colosseum of 1.1 million ounces gold based on 169 reverse circulation holes drilled to a depth of up to 1,000 feet below surface.

The resource was estimated to 800 feet depth for the East Pipe and 900 feet for the West Pipe (see below), both using a 0.5 g/t gold cut-off grade. 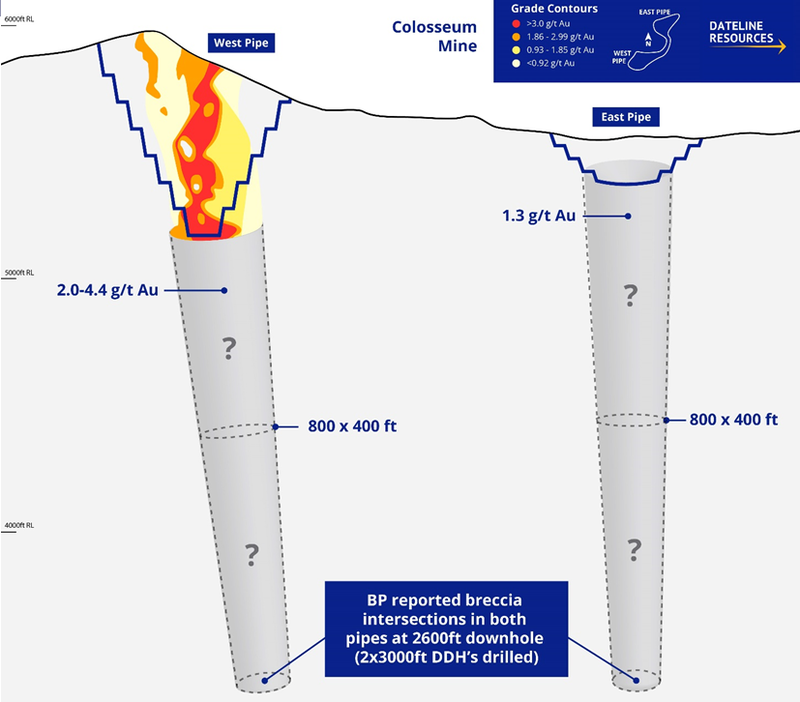 The original Feasibility Study completed in 1984 envisaged an 8.5 year mine life, with approximately 12.1 million tonnes for 777,000 ounces gold to be extracted over the Life of Mine (LOM).

The important factor to bear in mind regarding the Feasibility Study is that it was based on a meagre forecast gold price of US$450 per ounce.

The current price of approximately US$1900 per ounce implies significant upside and much improved margins relative to operating expenditure even though that part of the equation would have increased over time.

Looking at the broader picture in terms of the much more buoyant gold price, management said ‘’With a gold price 4-5 times higher than in 1992, there is significant potential to re-examine the remaining mineralisation below the open pit as well as explore for depth extensions.’’

Data from Barrick and satellite imagery to assist in exploration

Mining commenced in January 1988 and ceased in July 1992 with some stockpiled material processed through to May-1993.

A review of records indicates that there was ore remaining in the pits at the time of closure.

Dateline has also received extensive valuable information on Colosseum from Barrick that includes drill hole data and the database, assay certificates and grade contour maps that will be reviewed and digitised by the company.

Management recently acquired detailed satellite imagery for the region which replaces the need for a lidar survey as it provides accuracy down to 50 centimetres, and this dataset will be used for future mine planning.

Looking at the broader picture, managing Director Stephen Baghdadi said, “Based on the records, less than 400,000 ounces of gold was mined from a 1.1 million ounce resource that was drilled out by BP.

"We now know 2 deep diamond core holes were put down in 1972 in search of molybdenum.

"Both of the deep holes confirmed that the breccia pipes are still present at 2,600 feet below the surface, which is an average of 1,750 feet below the bottom of the BP-defined resource shell.

"This increases our confidence in the upside potential of the project.

"The company will continue to digitise the historical data and provide updates to the market on plans for a 2021 field program.”