Consolidated Zinc (ASX:CZL) has continued to hit high grades as part of its campaign to hit deeper horizons at its Plomosas zinc mine in Mexico – with grades of 48% hit.

It had previously released some results from the ‘Level 7 Deeps’ drilling campaign, but the latest results from assays back up the earlier bullish sentiments.

The latest drillhole, LV7DD018, was terminated at 62.5m having encountered “massive sulphide mineralisation” from 57.6m.

The assay results on their own don’t tell the whole picture, but given previous results had also hit high grades at Level 7, CZL will likely feel more validated about its decision to explore Level 7.

“Another fantastic interception, further confirming the high grade nature of the mineralisation below Level 7,” managing director Will Dix said.

With the latest hole assay now back, CZL has wrapped up the latest batch of drilling but given it’s now drilling just 200m to the north it is expected to release more drill results as this continues.

About CZL and Plomosas

The main game for CZL is the Plomosas Zinc Project in Mexico. 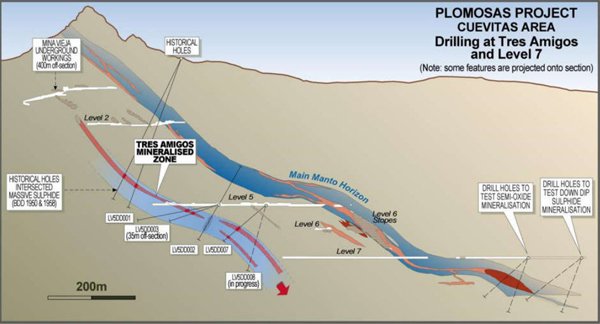