The ASX-listed miner told its shareholders today that FEED work had started on the project, which is forecast to supply 6% of the world’s niobium.

It said a slew of partners, consultants, and service providers had been appointed to the process, and it was already paying dividends.

It said that after review, the tailings dam for the project would cost less than predicted under the project’s definitive feasibility study, with the amount of earthworks needed reduced, therefore reducing up-front costs for the project.

It did not say, however, how much these savings would amount to.

It also updated on its financing efforts, saying that an indicative term sheet for a circa $100 million senior loan was in the process of being prepared.

In addition, the financier is working to secure a loan guarantees under Germany’s “United Loan Guarantee Scheme”, which “cover against economic and political credit default risks”.

Preliminary financing is being pencilled in for the fourth quarter.

Niobium has previously been labelled as a ‘space age’ material thanks to its use in products such as modern car bodies, space shuttles, and jet engines.

It is a key ingredient in high-strength, low alloy steel – with its demand set to grow at around 3% per year according to recent reports.

Panda Hill is one of the few niobium projects aiming to come onto the market in the coming years – taking aim at a market which has traditionally been tight.

“This will be the first new niobium producer in 40 years and the only new producer of this rare metal in the foreseeable future,” CXX chairman Craig Burton previously said.

This is still an early play and its impact remains to be seen, so take a cautious approach to any investment decision made with regard to CXX.

The results of the DFS indicated the project would have an annual EBITDA figure of $122 million, based on a project with an upfront capital cost of $196 million and production of 5400 tonnes of niobium per year. 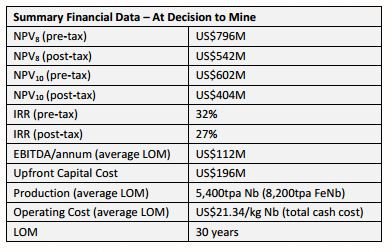