While only six holes out of a planned seventeen-hole campaign have been assayed to date, the first hole has delivered outstanding results.

Currently, drilling is continuing at Creasy 1 in keeping with the schedule, and will then move along strike to Creasy 2, with further assay results forthcoming as they are processed by the laboratory.

As a backdrop, the priority areas for drilling are along the 20 kilometres prospective gold strike (part of the Maynard Hills greenstone belt) on the eastern boundary as shown below. 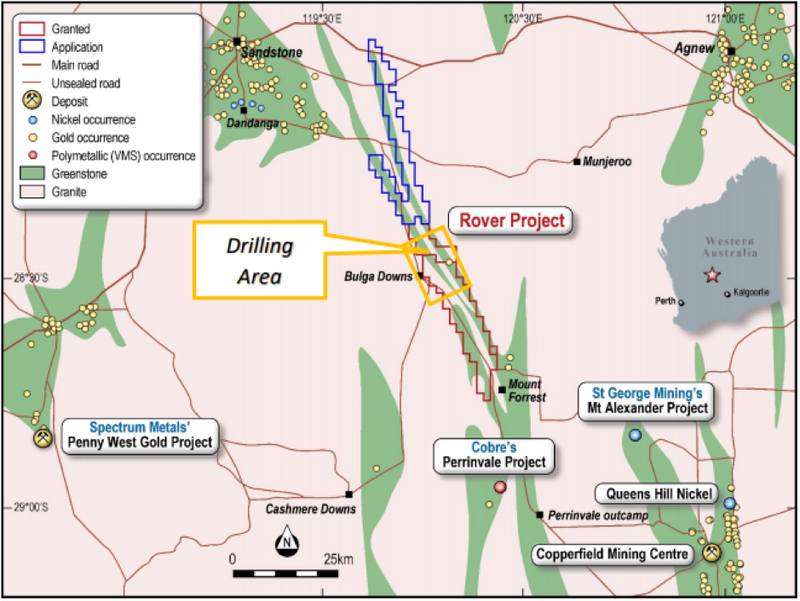 These areas include shallow historic economic gold intercepts at Creasy 1, as well as new gold and volcanogenic massive sulphide targets further south-east along the 20 kilometre prospective gold strike at Creasy 2.

From a geological perspective, this is between a prominent outcropping quartzite ridge in the east and a package of mafics / metasediments / BIF in the west which together form part of the Maynard Hills greenstone belt.

The early assayed RC drilling outcomes have confirmed the presence of shallow, high-grade gold at the Creasy 1 prospect that materially eclipses all historic drill results.

As indicated below, historic drilling on this section intersected 3 metres at 1.4g/t gold from 51 metres. 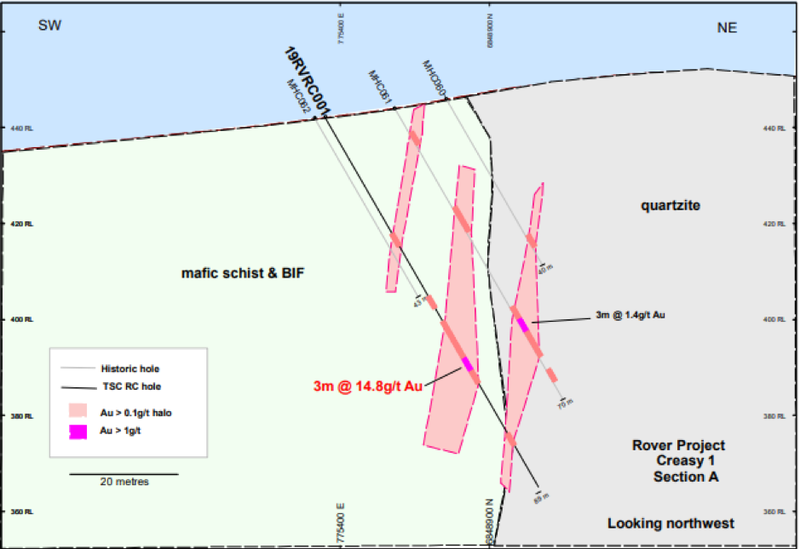 The successful first hole intersected a high-grade gold vein, within a larger halo of anomalous gold (0.1 to 0.8 g/t) from 48 metres to 63 metres (15 metre interval).

Importantly, gold mineralisation is open down dip and along strike.

Further success in nearby hole

Adding further confidence was the delineation of high-grade gold in drill hole 19RVRC006, approximately 820 metres to the south-east of 19RVRC001 along the Illara shear contact.

The mineralisation also remains open down dip and along strike.

From a broader perspective, anomalous gold above 0.1 g/t has been intersected in all six RC holes assayed to date.

These holes were drilled over a strike length of about one kilometre with 200 metre to 400 metre spacing, indicating that the Illara shear zone is mineralised over an extensive length, which delivers further exploration upside to the Rover Project.

The copper anomaly is defined by soil samples across four lines and extends for around 180 metres of strike.

Further, the anomaly appears to be related to BIF and mafic schist just west of the sheared quartzite contact, the same package of rocks mineralised to the south at Creasy 1 from which it is separated by a major structural offset.

The copper anomaly proximal to the Illara shear contact will be tested in this current RC drilling program.

TSC’s shares have doubled in the December half, and further positive share price momentum could be expected on the back of today’s results.

With further exploration results due to be released prior to year-end, and the company conducting an active RC drilling campaign in the March quarter of 2020 there are multiple share price catalysts in play.