The potential for Hot Chili Ltd (ASX:HCH) to transform its Cortadera Copper-Gold Project gets better by the day as the company releases promising drilling results.

Today, HCH announced a break-through in the collection of historical information, not previously available to the company.

New data regarding the Cortadera copper-gold porphyry discovery in Chile indicates a robust picture of its growth potential beyond the existing three porphyry centres discovered to date, revealing a much larger porphyry system than first recognised and confirmation of a fourth porphyry within the discovery window.

Management is particularly encouraged by key attributes of the Cortadera porphyry system including the association of magnetite with copper porphyry mineralisation.

This is a common characteristic in globally significant gold-rich copper porphyries such as Alumbrera in Argentina, Cascabel in Ecuador and Batu Hijau in Indonesia.

New anomaly larger than those at existing discovery

Hot Chili has secured geological logs for all 23,230 metres of historical diamond drilling. Initial modelling of Cortadera using this information has expanded the known local extents of each of the three porphyries (Cuerpo 1, 2 and 3).

Other key digital datasets now secured include geophysics (magnetic and IP surveys), surface geochemistry, mapping and various modelling and surveys undertaken during the period between 2011 and 2013.

Of most significance is the addition of a detailed ground magnetic survey across Cortadera as displayed below. 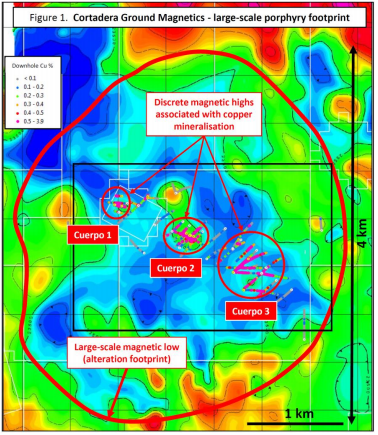 Within the centre of the magnetic footprint (magnetic low), each of the three porphyry centres are associated with discrete magnetic anomalies (magnetic high).

Importantly the survey revealed a fourth magnetic anomaly lying between Cuerpo 1 and Cuerpo 2 which appears to be larger and more intense than those related to the existing discovery as indicated below. 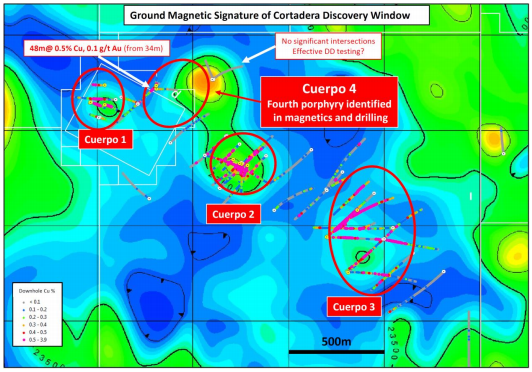 However, it is now apparent that an orphaned historical drilling intercept of 48 metres grading 0.5% copper and 0.1g/t gold appears to lie on the southern flank of the fourth magnetic anomaly.

This is shown in the north-west corner of the following map, just south of the 132 metre intersection which featured similar grades. 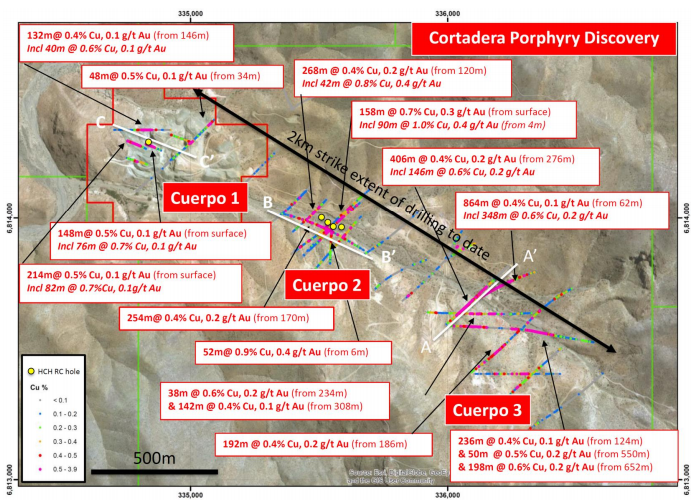