The recently completed stage 2 drilling campaign has comprised around 5,600 metres of aircore (AC) and reverse circulation (RC) drilling. This program targeted the connection of, and short extensions to, the north and south of zones A and B, aiming to extend the mineralised strike length to over three kilometres.

To date, shallow reconnaissance drilling has been completed at zone C, a parallel structure west of zones A and B.

Confirmatory drilling fences into each of zones A and B, including about 500 metres of diamond core into fresh rock.

Furthermore, drilling encountered broad zones of quartz veining, often within a sandstone and volcanic tuff package of host rocks, which is consistent with drilling on other parts of the mineralised structure. Visible gold was also observed in many panned samples at the drill rig.

Test assays have been completed using a variety of techniques in order to both mitigate the risk of sample bias and to maximise the potential for more representative results.

CORA CEO, Dr Jonathan Forster, said: “We are well underway with our exploration programme at Sanankoro with stages 1 and 2 drilling now completed and assaying in progress.”

“Drilling has continued on a reconnaissance basis, with the 1 km long gap between zones A and B, and a new area about 500m to the west (zone C) all tested by drilling to depths of up to 10x0m. Orientated core drilling at selective points at zones A and B are designed to confirm the drill results of Gold Fields, and also enable the company to better understand controls to mineralisation.”

“As with our earlier programme, we encountered broad zones of quartz stockwork along the structures tested, as well as deep levels of weathering. Panning of samples at the rig often encountered visible gold, ranging from a few grains to over a hundred grains in the pan, with various levels of coarseness. This is not unusual in Birimian gold deposits and as a result, test assays have been completed using a variety of techniques to ensure any potential sample bias in the results is managed effectively.”

“Test results have, in general, confirmed the preference to use an assay procedure with larger sample sizes in order to provide better correlation of gold grade with observations of visible gold.” 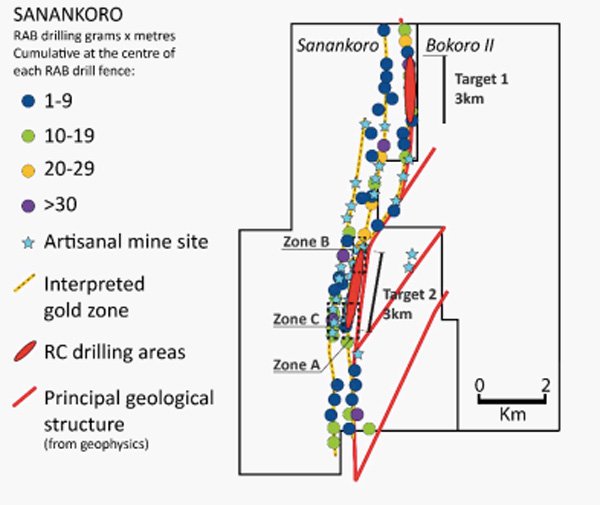