Emerging zinc miner Consolidated Zinc (ASX:CZL) has confirmed a down-dip extension of its key ‘Tres Amigos’ zone at the Plomosas project in Mexico.

It told shareholders ahead of a roadshow this week of the extension, based on drilling of the LV5DD007 hole down dip of the main Tres Amigos mineralised zone.

CZL said that the hole encountered “another significant intersection of massive sulphides and wide zone of disseminated and veined base metal sulphides.”

This, it said, confirmed its theory of the zone extending to below the main ‘Main Manto Marble’ section of the Plomosas project. 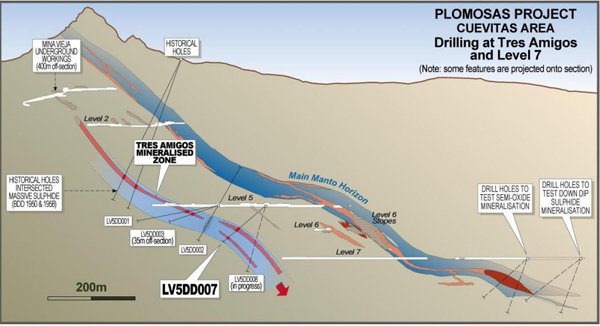 It believes the Tres Amigos zone may have been mined previously 400m along strike to the south south-east and 800m to the north west.

CZL said the current hole hit zones of mineralisation, with samples to be sent off for assay testing nearby.

The main project for CZL is the Plomosas Zinc Project in Mexico.

It has focused on the project due to the high-grade nature of the zinc ore mined at the project to date.