Comet Resources surges on back of proposed acquisition

Shares in Comet Resources Ltd (ASX:CRL) traded as high as 2.2 cents on Tuesday morning after the company announced that it had executed a binding heads of agreement for the proposed acquisition of the high-grade Santa Teresa Gold Project in Mexico.

This represented a gain of more than 20% relative to the company’s share price prior to today’s announcement.

Indeed, this is an important development for the group as it also includes a non-binding term sheet with Raptor Capital International Limited for gold streaming and royalty financing to fund activities at the project for up to US$20 million with an initial minimum of US$6 million.

The project is prospective for high-grade gold, with an existing Inferred Resource of 64,000 ounces gold at an average grade of 8.7 g/t, reported at a cut-off grade of 4 g/t.

In addition to the two claims, two additional claims as shown below totalling a further 378 hectares in the surrounding El Alamo district are proposed to be acquired from the vendor, El Alamo Resources Ltd (EARL). 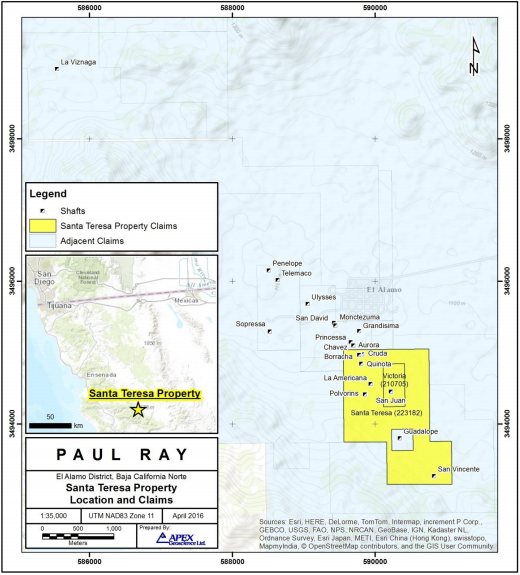 Placer gold deposits of the El Alamo district were discovered in 1888, and high-grade ore-shoots were subsequently discovered on the Aurora-Princess vein within a year.

Lode mining continued until 1907, after which leases were worked until 1912 when mining ceased as a result of the Mexican Revolution.

The reported gold production of the El Alamo district is estimated to range between 100,000 ounces and 200,000 ounces.

‘’Along with the non-dilutive development funding from Raptor, I believe subject to completion of due diligence, the project has potential to add significant value to Comet.

‘’Whilst we work through the detail on Santa Teresa, we continue preparations for the initial field exploration program at Barraba (New South Wales copper project), likely to commence in the September quarter.”

Following conclusion of the project acquisition, Comet proposes to focus physical works at Santa Teresa on assessing near term production opportunities within the Santa Teresa licence area itself and the other licences proposed to be acquired in the El Alamo district, and if this work warrants, commencement of mining activities.

All such activities may be financed by the Raptor stream financing.