Comet Resources Ltd (ASX:CRL) has executed a Share Purchase and Joint Venture Agreement (SPA) with the shareholders of El Alamo Resources Limited (EARL) for the acquisition of the Santa Teresa Gold Project.

The project is prospective for high-grade gold, with an existing non-JORC Inferred Mineral Resource of 64,000 ounces gold at an average grade of 8.7 g/t, reported at a cut-off grade of 4 g/t.

In addition to the two claims of the project, two additional claims totalling a further 378 hectares in the surrounding El Alamo district are being acquired from EARL.

Documentation of the binding gold streaming and royalty financing with Raptor Capital International to fund activities at the project for up to US$20 million (initial minimum of US$6 million) is advanced and is expected to complete in the near-term.

Discussing upcoming drilling and the company’s aim of establishing a maiden resource, Comet managing director Matthew O’Kane said, “From the initial announcement of this transaction to closing, the gold price has increased over US$200 per ounce.

‘’This has increased the potential value of Santa Teresa for Comet and we are now looking forward to commencing work on the historical drill core and a maiden JORC resource.

‘’In parallel, we will plan our initial field activities.

‘’The relatively under-explored nature of the project and the richness of the district provides substantial scope to extend mineralisation.”

Executives of Raptor Capital see this transaction as the forerunner to the project transitioning into a high-grade operating gold mine given the extensive experience that Comet’s board brings to the table.

The pending gold stream financing by Raptor that is subject to definitive documents being finalised is expected to fully fund the project through to production.

Reported gold production of up to 200,000 ounces in El Alamo district

Placer gold deposits of the El Alamo district were discovered in 1888, and high-grade ore-shoots were subsequently discovered on the Aurora-Princess vein within a year.

Lode mining continued until 1907, after which leases were worked until 1912 when mining ceased as a result of the Mexican Revolution.

The reported gold production of the broader El Alamo district as shown below has been estimated between 100,000 to 200,000 ounces of gold. 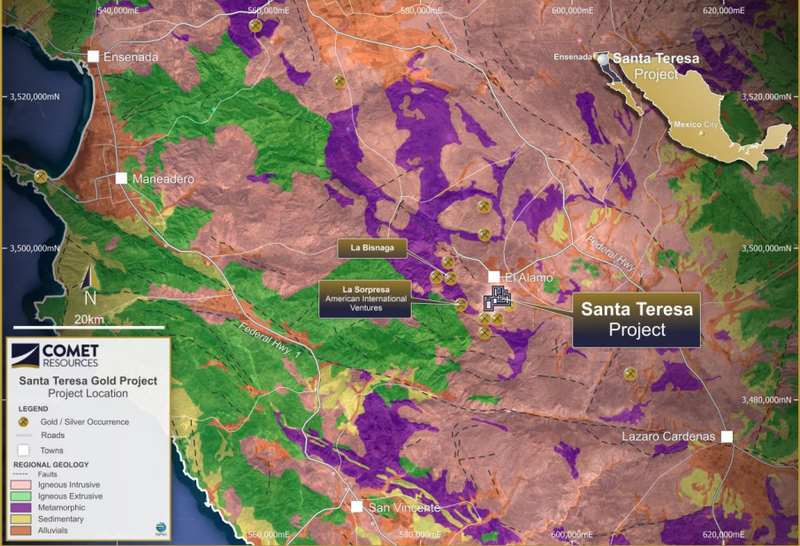 Initial site work at Santa Teresa will involve assessing near term production opportunities within the Santa Teresa licence area itself and the other licences proposed to be acquired in the El Alamo district, and if this work warrants, commencement of mining activities.

All such activities may be financed by the Raptor stream financing.

In addition, due to the recent increase in the gold price, work will also investigate options to increase the size and confidence of the resource prior to commencement of mine development activities.

Gold prices have continued to rise since the proposed Santa Teresa transaction initially announced, and some analysts are tipping further upside due to ongoing economic uncertainty related to the coronavirus, including the potential for central banks to ease monetary policy, a factor that has traditionally provided support for the gold price.