It was just five weeks ago that shares in Classic Minerals Ltd (ASX:CLZ) surged 200% on all-time record volumes after the company released assays results from the company’s reverse circulation (RC) drilling program at Kat Gap, part of the group’s Forrestania Gold Project (FGP) in Western Australia.

Assay results released on Tuesday morning show that the results just keep getting better with wide intersections now proven to be increasing in width at depth and deeper drilling yielding higher grades.

One of the widest intersections to date — in what must be remembered is an early stage exploration program — was 13 metres grading 4.9 g/t gold from 33 metres including one metre grading 22 g/t gold, also close to surface.

The open-ended deposit lies within a five kilometre long geochemical gold anomaly that has seen very little drill testing, and management sees the potential for the discovery of a substantial gold deposit within the project area.

Classic is still gaining an understanding of the geology, and it is rare to find projects that consistently produce such stunning grades so early in their life.

Particularly given the value that should be attributed to Classic’s other assets as we outline below, the company’s market capitalisation of $8 million even after the recent doubling in its share price indicates there is scope for substantial upside.

From a geological perspective, Kat Gap keeps on growing with the main granite-greenstone contact gold load extending down dip with significant gold mineralisation intersected adjacent to the cross cutting dyke.

It is also worth noting that the project is strategically located approximately 70 kilometres south of Classic’s Forrestania Gold Project (FGP) containing the Lady Magdalene and Lady Ada gold resources.

The FGP contains a Mineral Resource of 5.3 million tonnes at 1.4 g/t for 240,000 ounces of gold, with a Scoping Study indicating both the technical and financial viability of the project.

The map of the broader area and the current post-mining Mineral Resource for Lady Ada, Lady Magdalene and Lady Lila is tabulated below. 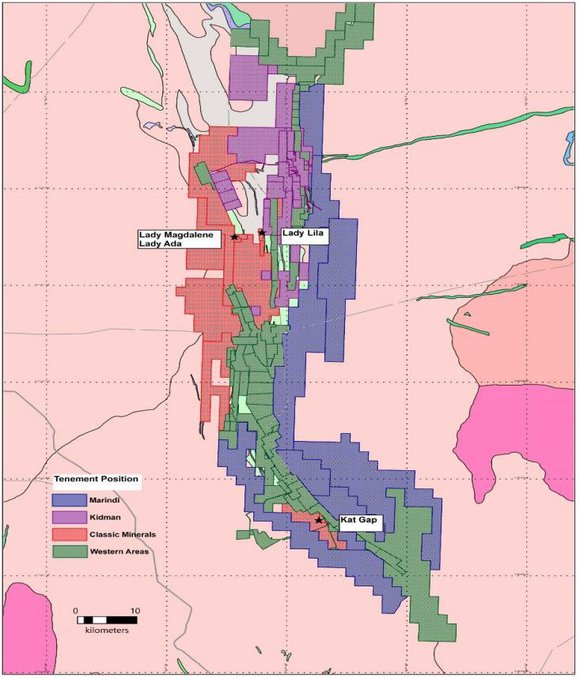 Open in all directions with grades increasing at depth

Part of this round of drilling focused on testing down dip projections of recent high-grade intercepts of the newly extended northern zone, and this confirmed that the system remained open in all directions.

Highlighting the potential for resource expansion through deeper drilling, chief executive Dean Goodwin said, “These deeper gold intersections clearly show that Kat Gap has legs with the potential to grow significantly at depth.

“The further down we drill, the wider the gold zones seem to be getting. This is a function of the structural setting. At the contact flat is out, the fault zone opens up wider in the gold lodes for can accordingly.

“I’ve seen this time and time again it Goldfields, and we clearly need to drill more deep holes to follow the system down.

“The high grades and shallow nature of the gold mineralised system on the granite-greenstone contact will enhance the economics of any future open pit mining operation.’’

Part of the next stage of drilling will include some deep diamond holes to collect valuable structural data at depths up to 300 metres below existing drill coverage.

Goodwin’s comments regarding the style of mineralisation and the prospects for high-grade gold at depth are well supported by large producing mines in the region.

The next stages for Kat Gap will be to extend the known gold mineralised zone further north and south from the current drilling area.

If successful, that would give the company a combined strike length of one kilometre.

In conjunction with conducting this exploration, Classic will also probe at depth down dip along the entire 400 metres of gold mineralised granite-Greenstone contact delineated to date.

While there are plenty of chapters still to be written in the Kat Gap Project, the continued strong results highlighted today suggest that Classic could be one of the best emerging sub-$10 million market cap plays based on the value of its assets, management’s astute exploration strategy and the quality of the ore in ground that has already been established.