The company completed a total of 310 auger holes at the Kat Gap Project beyond the existing resource area, resulting in the identification of a substantial gold anomaly located in the granite west of the main granite-greenstone contact where Classic has identified an inferred gold resource of 975,722 tonnes at 2.96g/t for 92,856 ounces.

The group’s combined Mineral Resource of 8.24 million tonnes at 1.52 g/t for approximately 404,000 ounces of gold, along with the high-grade discoveries at Kat Gap, and now the emergence of impressive results in an extensive and broad region further strengthens the company’s profile as an emerging multi-asset gold play.

The following grid map indicates the significance of these results in terms of their location. 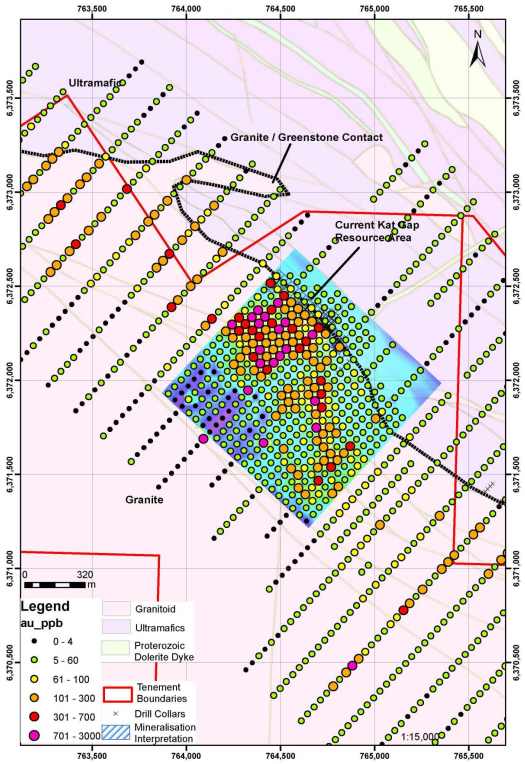 A sustained campaign of drilling close to the granite-greenstone contact as seen above has yielded outstanding high-grade drilling results over the past 12 months, providing management with confidence that more of the same would be found along that geological trend.

Management’s confidence proved to be well-founded, and now these most recent results have significantly expanded the prospective area of mineralisation, indicating that good quality mineralisation is likely to be delineated beyond the recent area of focus.

Commenting on this step-change in the Kat Gap Project, chief executive Dean Goodwin said, ‘’This new high-grade auger soil gold anomaly is well out into the granite and represents an exciting new development for the Kat Gap Project.

‘’We have been looking west out in the granite for a while now and wondered what might be lurking out there.

‘’We finally bit the bullet and sent an auger rig out west to test the granites surface soil for gold, and we are pretty happy with what we’ve found so far.

‘’The gold is at a very high level of concentration for an auger soil anomaly, suggesting something substantial may be hiding underneath.

‘’Given the gold is in all types of surface material including sand, gravel and clay, the anomaly is most likely in-situ and not transported in from another location.

‘’Also, the current landforms out in the granite are at a higher level than the main granite-greenstone contact zone where we have been getting all our gold to date.

‘’This is further evidence that the soil anomaly is being generated from gold mineralisation directly beneath in the granite and not from the inferred resource on the main contact zone.’’

The holes encountered a variety of surface materials including sand, sandy pisolitic gravel and clays.

The rig was unable to penetrate below 70 centimetres due to a hard crust layer, but the program returned 5 samples above 1 g/t gold with a maximum grade of 2.13 g/t gold.

The main gold anomaly is 900 metres long and has a width of up to 500 metres and is located well out in the granite west of the main drilling area at Kat Gap.

Preliminary interpretation of the auger soil data suggests two main orientations for potential gold mineralisation within the host granite, one in an east-west orientation and the other in a north-south orientation.

Recent drone contour surveys of the project area show the main landforms over the granite are at a higher ground level than relatively flat surfaces covering the main resource area.

These landforms would suggest the auger soil gold anomaly probably formed from gold mineralisation directly beneath in the granite and not transported in from the gold resource on the main granite-greenstone contact, an important characteristic in terms of the mineralisation identified potentially being part of a larger deposit.

Also, gold has been found in all types of materials covering the granite, suggesting the anomaly is most likely in-situ and not transported in from another location.

Very limited historical drilling has been conducted in the anomaly area with previous drilling testing only at the most northerly and southerly limits.

Consequently, when Classic starts to sink the drill bit deeper there is the potential for a resource expansion, a milestone that would be a market-moving development as the company progresses its Kat Gap Project.

There are also some key near-term share price catalysts following the recent completion of an extensive RC drilling campaign along strike to the north and south, within the existing Kat Gap resource limits.

Management hopes to be in possession of assays from these holes in the coming weeks, an important development for the company’s flagship project.