Classic Minerals has now completed 16 holes for a distance of 1,653m at the Kat Gap project.

The aim of this drilling program was to improve or increase known high-grade gold mineralisation.

Classic Minerals has been successful in this aim, with drilling results from Kat Gap continuing to deliver significant zones of gold mineralisation located on the granite-greenstone contact.

Recent drilling at Kat Gap also showed that high-grade gold mineralisation projects down-dip and potentially down-plunge at depth and along strike on the southern side of the Proterozoic dyke.

On 21 January this year, Classic announced that it had substantially upgraded its Lady Ada Mineral Resource Estimate at Forrestania.

Some of the better results from the recent campaign include:

The following map shows past and current drilling results: 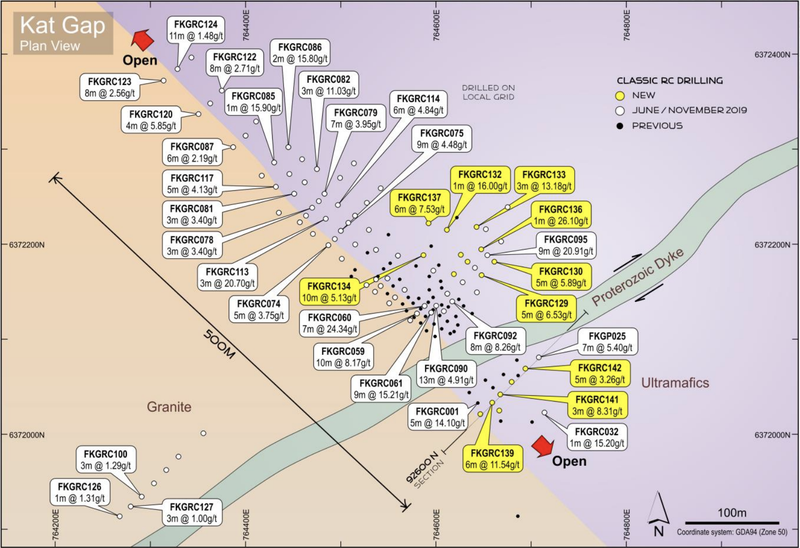 CEO Dean Goodwin was suitably buoyed by the results saying, “This latest round of drilling has been extremely encouraging with high grade gold intersected at depth and along strike on the southern side of the Proterozoic dyke.

“I’m very pleased with the deeper drilling as it’s starting to paint a picture for extensive mineralisation down plunge beneath our earlier shallow high-grade drill hits. It’s early days but it appears we may have a relatively flat shallow plunging system tied to the flattening of the main granite-greenstone contact.

“I’ve seen this type of structure before in the Forrestania area so it’s not surprising to see it at Kat Gap.

“We also drilled on the southern side of the Proterozoic dyke for the first time in over a year. It was great to see shallow high-grade gold on this side. There is no geological reason why the gold mineralisation shouldn’t be any different to the north side. Given only a small number of holes have been drilled on the south side of the dyke to date, these new results are extremely encouraging and clearly demonstrate the great potential the system has.

If these ore-grade zones continue further south as far as they do north, then we could be looking at strike lengths in-excess of 800-900m.”

The next stages of RC drilling at Kap Gap will look to extend the known mineralised zone further north and south from its current drilling area.

Having bypassed the southern strike for some time now, Classic Minerals will re-set its focus on the North and South targets, with the company to test the northerly and southerly extensions for another 100-200m along strike

“If we have similar numbers south of the dyke, then we could be looking at something really special with strike lengths in-excess of 900m in total,” Goodwin said.

“Deeper step out holes will also be drilled around the most recent holes on the northern side of the dyke to gain a better understanding of the potential extent of the flat plunging system.”

The drilling on the south side has also identified a slight off-set in the main granite-greenstone contact by around 20-25m to the west as can be seen below: 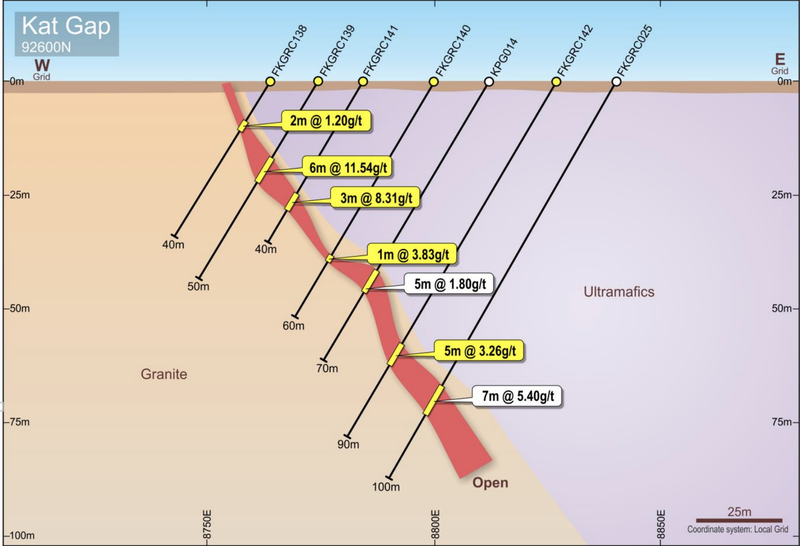 Classic has planned follow up RC holes with drilling scheduled for early February.