The FGP contains a Mineral Resource of 4.8 million tonnes at 1.40 g/t for 216,650 ounces of gold, with a recent scoping study suggesting both the technical and financial viability of the project.

However, with the continued delineation of high-grade gold mineralisation at the Kat Gap Project, the strike length is growing, a factor that could potentially further improve the financial metrics of a project at FGP.

Classic has just completed a total of 21 holes for 1580 metres at the Kat Gap project, 7 holes for 640 metres at Lady Magdalene and 3 holes for 270 metres at Stormbreaker with the aim of improving/increasing known high-grade gold mineralisation.

These results build on previous exploration in excess in 2019, a landmark year for the company. 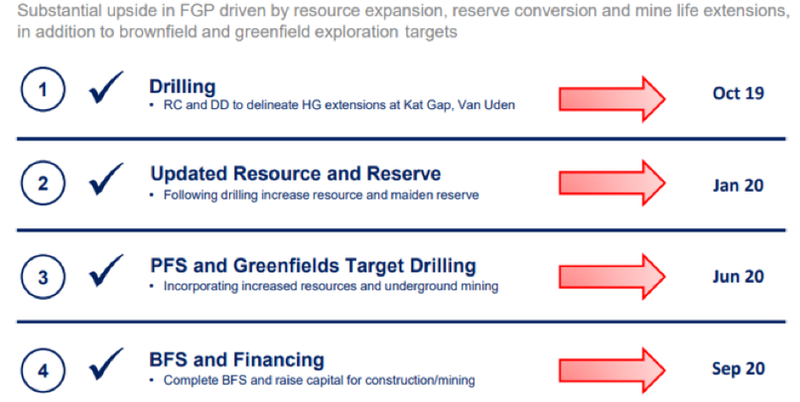 2019 has been a landmark year for Classic Minerals.

Strike increases to more than 500 metres

Drilling results from Kat Gap continued to deliver the goods with significant zones of gold mineralisation located on the granite-greenstone contact.

Most holes returned gold mineralisation, and drilling has now extended the strike coverage to over 500 metres with mineralisation open in all directions.

Both quartz veins were intersected at shallow depths in the leached profile approximately 15 to 20 metres below surface.

The following map shows the location of recent drill holes in yellow at Kat Gap, as well as other strong drilling results (white) recorded during previous exploration campaigns. 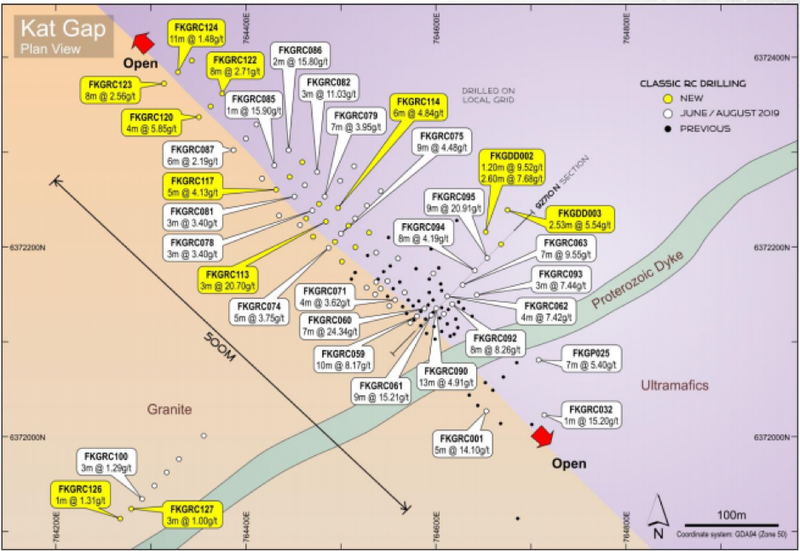 Just the tip of the iceberg

Highlighting the potential for the company to discover a much larger system at Kat Gap, Classic chief executive Dean Goodwin said, ‘’Kat Gap keeps on growing both along strike and at depth.

‘’I’m very pleased with the extended zones of ore grade gold intersections along strike to the north, together with the great results we are now starting to see down dip at depth.

‘’Only a small number of deep holes have been drilled at Kat Gap to date, and these new results clearly demonstrate that the system has great potential to grow not only along strike but at depth as well.

‘’The northern extension RC drilling focused on testing the granite-greenstone contact at shallow depths down to only 50 metres vertical below surface.

‘’If these ore-grade zones continue further north, then we could be looking at strike lengths in-excess of 600 to 700 metres.’’

Three diamond holes FKGDD001 – FKGDD003 for a total of 527 metres were also drilled, testing beneath shallower high grade gold mineralisation on the main granite-greenstone contact lode in the vicinity of the cross-cutting Proterozoic dyke.

These holes can be seen on the above map, once again represented in yellow and situated to the far right.

These deeper holes were primarily designed to gather important lithological and structural data from the core to gain a better understanding of the controls, orientation and location of potential high-grade plunging shoots and to aid in future planning of deeper diamond and RC holes.

The holes intersected narrower zones of gold mineralisation which was somewhat expected as the contact zones were steeper dipping than originally thought and shoot control and orientation is yet to be understood.

The flatter dipping contact zones are clearly associated with high grade shoots which the diamond holes have missed.

Where the contact is steep the gold lode tends to narrow and weaken in grade.

As the contact rolls to a flatter angle, both the width and grade of the gold lode generally increases.

Further deep drilling is required at sufficient spacings to determine the location of these flatter dipping higher grade contact zones and their potential plunge direction.

Future drilling programs at Kat Gap will focus mainly on testing the main granite-greenstone contact further north and south along strike from the current drilling area.

The next RC drilling program will test the northerly and southerly extensions for another 100 metres along strike.

RC drilling will also probe at depth below the current shallow holes along the entire 500 metres of strike delineated by Classic to date.

Aircore and RC drilling programs will also be conducted out into the granite to test the large five kilometre long geochemical anomaly identified in historical auger soil sampling.

There is strong potential for additional mineralisation to be identified up-dip, down-dip and along strike, both outside of and within the existing RC drill coverage.

Classic has planned follow up RC holes with drilling scheduled for mid-December, and in discussing the group’s strategy Goodwin said, ‘’The next stages for Kat Gap are to continue RC drilling programs, extending the known mineralised zone further north and south from our current drilling area.

‘’We have neglected the southern strike potential south of the Proterozoic dyke.

‘’There is no geological reason why the gold mineralisation should be any different on the southern side, we just worked on the north side because the gold grades were slightly better.

‘’The next RC program will focus not only on the northern strike but also the southern strike potential for at least 100 metres.

‘’If we have similar numbers south of the dyke then we could be looking at something really special with strike lengths in excess of 800 metres in total.

‘’Deeper holes will also be incorporated into the next few programs to probe at depths of between 200 metres and 300 metres below existing drill coverage.’’