Looking at the group’s operational achievements as well as its share price performance, it is difficult to identify a better three month period in Classic Minerals Ltd’s (ASX:CLZ) history than the September quarter.

Companies with a low dollar value share price are often referred to as penny-dreadfuls, but Classic’s shareholders will be focusing on the quantum of the share price increase over the September quarter rather than the value of the company’s shares given the 300% capital gain.

With the next drilling campaign about to commence there is the prospect for further upside, particularly given management has a model to work from that has consistently yielded high-grade returns.

Management released its quarterly activities report on Thursday morning highlighting that drilling at the company’s Forrestania Gold Project (FGP) had extended the down-dip projection adjacent to the Proterozoic dyke to over 100 metres vertically below surface, with mineralisation open in all directions.

Deeper drilling completed to date has shown the main granite – greenstone contact flattening out in the down-dip direction.

Where the contact is steep the gold lode tends to narrow and weaken in grade.

As indicated below, where the contact rolls to a flatter angle, both the width and grade of the gold lode tends to increase. 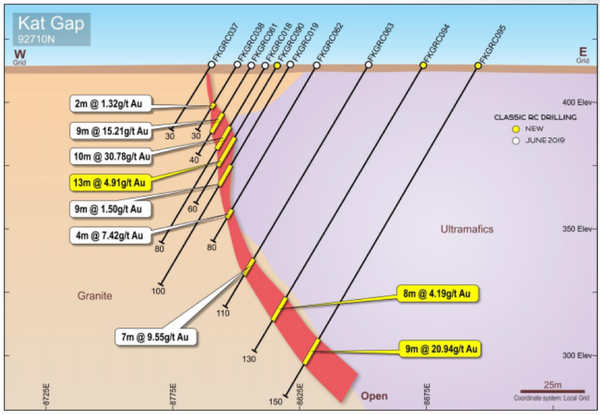 Blueprint for success to be applied in upcoming drilling

Future drilling programs at Kat Gap will continue to test the main granite – greenstone contact further north and south along strike from the current drilling area.

This includes a 3.5 kilometre section of prospective regional strike within the project that has received limited exploration.

The next RC drilling program will test northerly extensions of the contact for another 200 metres to 300 metres along strike and probe the depths below shallow holes along the entire 400 metres of strike delineated by Classic to date.

Historical RC drilling at Kat Gap is mostly on line spacings ranging between 200 metres and 300 metres.

Management believes that there is strong potential for additional mineralisation to be identified up-dip, down-dip and along strike, both outside of and within the existing RC drill coverage.