A Classic discovery in the making at Kat Gap

Shares in Classic Minerals Ltd (ASX:CLZ) were up 200% under all-time record volumes at one stage on Wednesday after the company released assays results from the company’s recent reverse circulation (RC) drilling program at its Forrestania Gold Project (FGP) in Western Australia.

Classic completed a total of 32 holes for 2040 metres at the Kat Gap project with the aim of improving/increasing known high-grade gold mineralisation.

Drilling results from Kat Gap continued to impress with significant zones of gold mineralisation located on the granite greenstone contact.

In what is shaping up as the bargain basement discount deal of the year, Classic recently purchased the Kat Gap project from private company Sulphide Resources Pty Ltd for a total consideration of $250,000 plus GST, and a 2% NSR royalty on production from tenements E74/422 and E74/467 which are shown below. 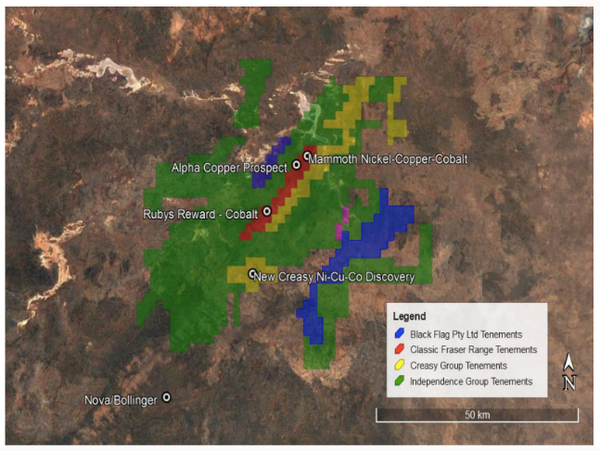 Classic’s assay results are outstanding on all fronts.

Firstly, the average width of seven high-quality intercepts is 7 metres and the average grade is approximately 14 g/t gold with the best intercept being 7 metres grading 24 g/t gold from 24 metres.

Depths range from 7 metres to 89 metres, but most were within the 20 metre to 50 metre range as shown below.

The system is wide open with no historical RC drilling further north along strike.

This round of RC drilling at Kat Gap was focused primarily on testing a 200 metre long northerly strike extension of the main granite-greenstone contact along with testing up-dip and down-dip projections of previous high grade intercepts.

The system remains open in all directions.

Of course, the high grades and shallow nature of the gold mineralised system on the granite-greenstone contact will enhance the economics of any future open pit mining operation.

However, there looks to be far more to Kat Gap than near surface ore, and on this note, chief executive Dean Goodwin said in fairly colloquial terms, ‘’I’m absolutely rapt with the extended zones of ore-grade gold intersections along strike to the north, together with the great results we are now starting to see down dip at depth.

‘’Only a handful of deep holes have been drilled at Kat Gap to date.

‘’These new results clearly demonstrate that the system has great potential.

‘’The northern extension drilling focused on testing the granite-greenstone contact at shallow depths down to only 50 metres vertical below surface.

‘’If these ore-grade zones continue further down dip and along strike for another 200 metres to 300 metres, we’ll have a real tiger by the tail.’’

The next stage for Kat Gap is to continue an aggressive RC drilling program, extending the known mineralised zone further north and south from the current drilling area.

Management’s plan is to focus its attention on testing the northerly extensions for another 300 metres.

Classic will also probe at depth down dip along the entire 400 metres of gold mineralised granite greenstone contact that the company has delineated to date.

This work should give us a pretty good idea of how good this system really is.

A few deep diamond holes to collect valuable structural data will also be incorporated into the program to probe at depths between 200 metres and 300 metres below existing drill coverage.