The Chuscal target is part of the 100% owned Quinchia Gold Project in Colombia which includes the Tesorito near-surface porphyry, and the Miraflores 450,000 ounce Reserve all within a three kilometre radius, plus several undrilled high priority exploration targets.

Drillhole CHDDH10 was the first hole designed to test the eastern or Guyacanes porphyry target established via vectoring information gained from previous drilling.

This extended from 75 metres downhole with greater density of porphyry vein textures, increased magnetite and elevated gold and porphyry pathfinders, including an intercept of 38 metres at 1.14 g/t gold from 82 metres within 94 metres at 0.63 g/t gold and 20 parts per million molybdenum from 82 metres.

This drillhole is the most westerly on the following diagram. 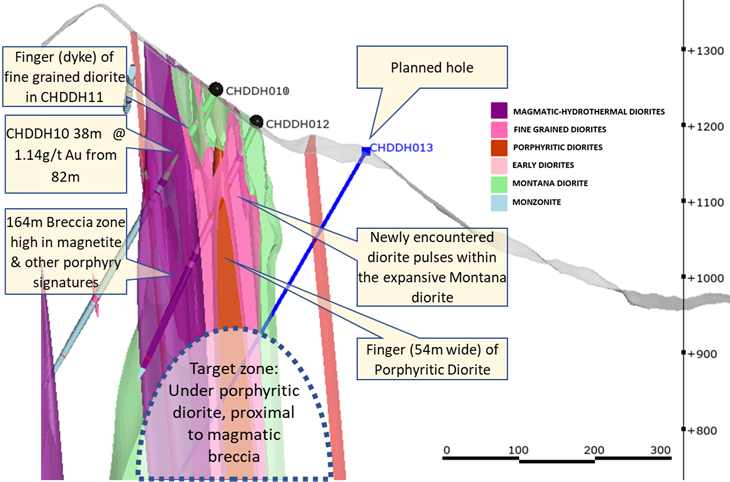 The aforementioned intercept and other evidence extracted from spatial relationships of lithologies, particularly breccias, was the basis for commissioning CHDDH11 from the same drill pad as CHDDH10, but oriented to the north-west.

This intercepted fine-grained diorite dykes, being a new unit interpreted to be part of the target porphyry suite with elevated porphyry pathfinders.

Vectoring information from CHDDH10 and CHDDH11 were inputs into the location of CHDDH12, located further south of CHDDH10 and collared at a lower elevation.

Based on visual logs (assays pending), CHDDH12 has intercepted the same mineralised fine-grained diorite intersected in CHDDH11 and intruded within that pulse is a 54 metre wide zone of an additional intrusion of porphyritic diorite from 89 metres downhole.

This unit has not been previously logged and displays chlorite-sericite alteration overprinting weak potassic alteration - fine-grained diorite mineralisation that appears to be evident in CHDDH12 is shown below. 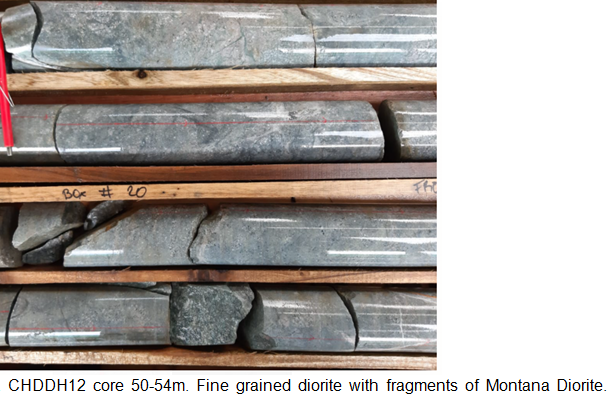 One of the key takeaways from recent drilling results is the delineation of gold mineralisation potential at depth where there lies a 164 metre wide zone of magmatic breccia from 211 metres with classic porphyry pathfinder characteristics.

This is the first occasion that diorite, interpreted to be part of the target causative porphyry intrusive suite, has been logged within the eastern target zone, which together with the characteristics of the 164 metre breccia zone, suggests to management that it is closing in on the porphyry target.

The next drill hole (CHDDH13) will step 150 metres further south from pad CHDDH12 and, given the drop in pad elevation, will drill some 200 metres below the aforementioned intersections to test for the presence of an underlying causative gold porphyry. 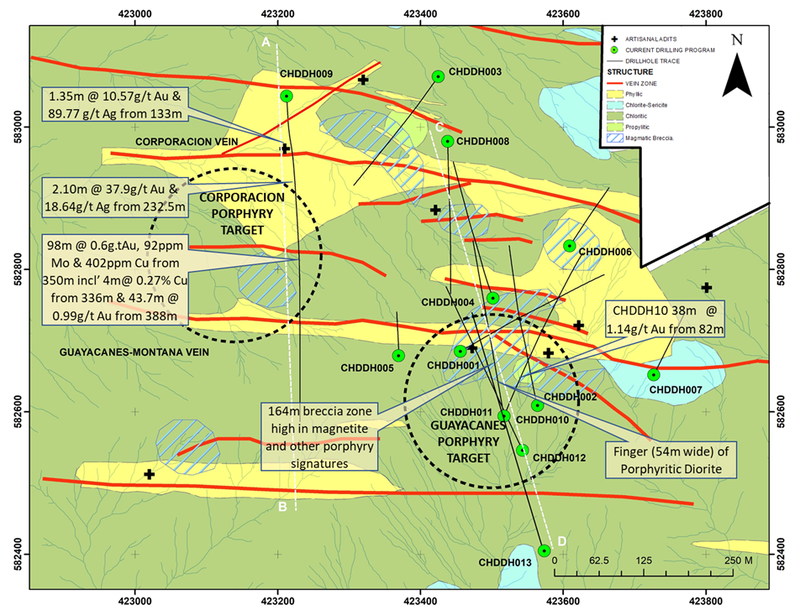 Discussing these encouraging results and their implications based on the company’s knowledge of surrounding geological features, Los Cerros managing director Jason Stirbinskis said, “This is a highly encouraging development. Through an iterative approach we believe we are narrowing the area in which we expect to hit the eastern Guyacanes causative porphyry.

"In-fact, pending receipt of assays from CHDDH12, we might have already hit the porphyry target in CHDDH12.

"The developing geological model is not dissimilar to the more advanced Tesorito model in which we see distinguishable pulses of different diorites belonging to the porphyry suite with varying degrees of mineralisation.”

However, Los Cerros was also attempting to gather critical data to support the presence of a western causative porphyry intrusion accountable for local surface gold and molybdenum anomalism. 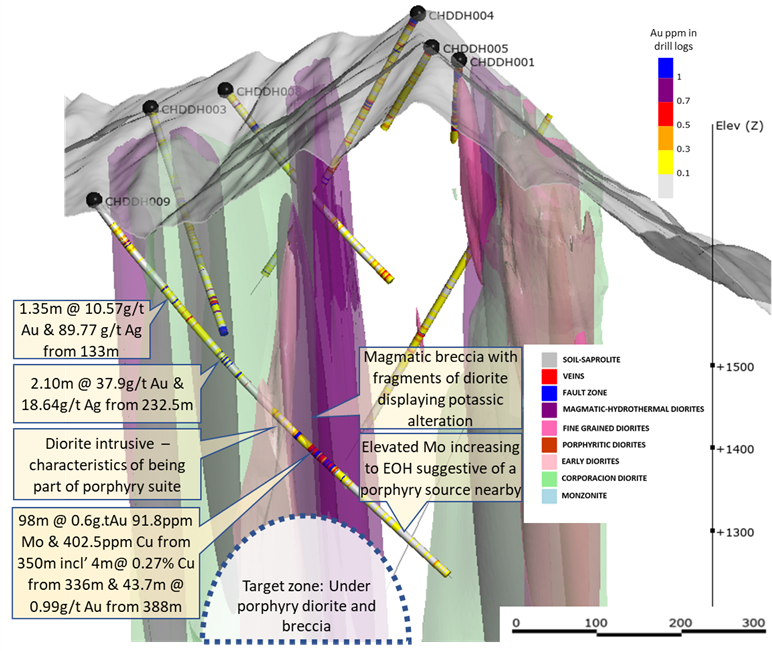 The shallow drilling program continues to discover numerous epithermal veins across the entire Chuscal area, reporting narrow high-grade gold and silver intersections of up to 98 g/t and 90 g/t respectively.

The economic potential of these gold-silver veins remains an ongoing investigation as management focuses on the hunt for large scale gold-copper porphyry style mineralisation.

With regard to the second objective, after leaving the Corporacion Diorite at 332 metre, CHDDH09 entered an 18.3 metre dyke of porphyritic diorite which is interpreted to be the upper portion of the western porphyry target with classic porphyry alteration and A-type veining.

It is around this zone of diorite and breccia that gold mineralisation and elevated porphyry element pathfinders were encountered, including 98 metres at 0.6 g/t gold, 92 parts per million molybdenum and 402 parts per million copper from 350 metres.

Hole CHDDH09 is the first occasion that porphyritic diorite, interpreted to be part of the causative porphyry intrusive suite, with associated magmatic breccia, has been logged in the western porphyry target.

From 530 metres to 613 metres (end of hole) there was a moderate increase in molybdenum grades in monzonite with weak potassic alteration to levels suggesting this zone is also near to a causative porphyry source.

Commenting on this development Stirbinskis said, “There is clearly a zone of significant interest from 318 metres worthy of follow up defined by porphyritic diorite, magmatic breccias and elevated copper and molybdenum.

"The deeper zone from 530 metres with a range of molybdenum grades that are typically associated with mineralised porphyries could be attributable to the same porphyry source swelling at depth.”

There could be more catalysts on the horizon for Los Cerros as management expects to provide an update on exploration activities at the near-surface Tesorito porphyry which lies two kilometres to the north of Chuscal before the end of the month.