Castillo Copper (ASX:CCZ) this morning announced it has discovered high-grade cobalt surface mineralisation at its Broken Hill Project, located just outside the town of Broken Hill in NSW.

The project is located close to third-party concentrate processors, and has excellent transport infrastructure through to the Adelaide port allowing for production to be fast-tracked.

CCZ has progressed desktop research into legacy data on the Broken Hill Project, which has uncovered four highly prospective anomalous zones on the eastern and southwestern boundaries that are contiguous with neighbouring tenure.

The company uncovered legacy data highlighting up to 2,060ppm cobalt from surface in the northeast part of the project area on a strike trending southeast within CCZ’s tenure. Further to the south, along the eastern boundary, significant surface mineralisation trending into the tenure is apparent with up to 990ppm cobalt.

Significant contiguous cobalt surface mineralisation is apparent in several zones striking towards the project area, with recordings from two separate locations up to 3,000ppm and 4,000ppm respectively.

While just outside the western boundary, but on strike that runs into CCZ’s project area, legacy drill-holes highlighted intersections that were up to 7,000ppm cobalt. 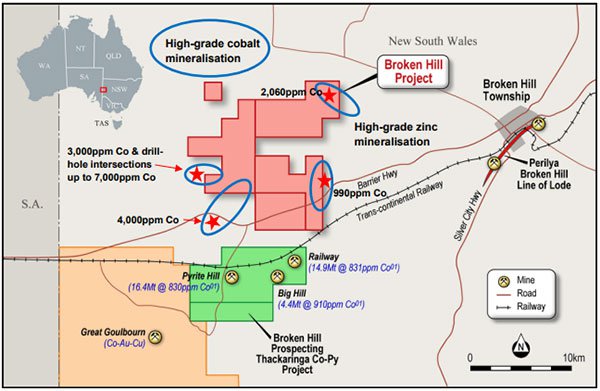 Slightly to the north of the tenure, legacy drill-holes with up to 2 per cent zinc were recorded on a strike that is open in all directions into CCZ’s project area. Further work will determine the extent of the zinc mineralisation into CCZ’s tenure.

On the western boundary, there are two areas where legacy drill-holes have zinc recorded up to 2.1 per cent and 3 per cent respectively. The legacy data may be sufficient to generate a modest mineral resource on the western most area.

Yet there remains significant potential further mineralisation discoveries, with only limited drilling evident across the majority of the tenement area. That’s especially true, considering that historic exploration was focussed on Broken Hill style gold-zinc mineralisation, not Thackaringa style cobalt mineralisation.

With most of the central area of the tenure covered by a veneer of alluvial sand deposits burying rock exposures, historic surface and shallow auger sampling has been ineffective. This leaves potential to find incremental high grade cobalt mineralisation using modern technology to identify potential drill targets is material.

While the anomalism identified outside the tenure, which is trending undercover into CCZ’s project area, has not been adequately tested via historic sampling and could be hiding undiscovered mineralisation. 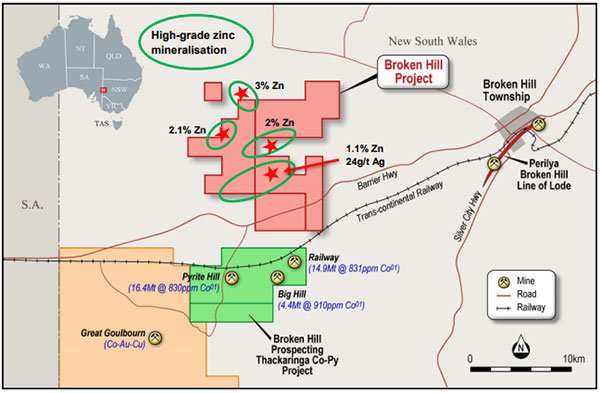 The next phase is to generate models for the most promising sections of the Broken Hill Project and highlight key targets for the inaugural drilling program. This is scheduled to commence following Cangai Copper Mine campaign.