Castillo Copper’s (ASX:CCZ) geology team recently undertook an extended site visit to the historic Cangai Copper Mine in northern NSW. This deposit has a JORC compliant Inferred Resource of 3.2 million tonnes grading 3.35 per cent copper, one of the highest in Australia.

One of the key aims of the site visit was to assess transportation infrastructure and logistics, in the event of the mine re-opening. As high-grade supergene ore, it can be directly shipped to Asian customers.

Management has confirmed that the product can be trucked to Grafton to access the railway network, which connects to Newcastle Port, located approximately 500 kilometres south of the mine.

As a backdrop, the Cangai Copper mine is part of CCZ’s broader Jacaderry project which comprises three prospects (two in the south that are contiguous) in the New England Orogen in New South Wales which are highly prospective for copper-cobalt-zinc. 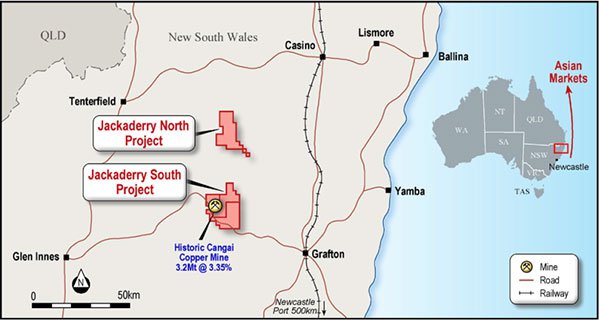 Arguably though, of most significance is the historic Cangai Copper mine given legacy data confirms the presence of supergene ore with 35 per cent copper and 10 per cent zinc, indicating its direct shipping ore potential.

It should be noted here that this is an early stage play and investors should seek professional financial advice before making an investment decision.

Management noted that, incrementally within the JORC modelled boundary, an estimated 900 metres strike length was identified, which included pXRF readings of between 1 per cent and 5 per cent copper.

In order to determine the presence and extent of a mineralisation halo, a priority drilling target will be testing between the lodes. Should drilling confirm there is extended copper mineralisation within this strike length at grades between 2 per cent and 3 per cent, then there is expected to be significant upside to the potential resource size.

Management also highlighted the discovery of five extensive historic stockpiles around the main working sections that had pXRF readings of between 10 per cent and 30 per cent copper from various samples, consistent with early desktop findings showing up to 35 per cent copper in supergene ore.

Outside the JORC modelled boundary, extensive examples of outcrops exhibiting
copper mineralisation were identified. These had pXRF readings up to 1.5 per cent copper, which is economic grade ore.

Commenting on these developments, CCZ’s Executive Director, Alan Armstrong said, “The key takeaway from the site visit is empirical verification that copper mineralisation is more extensive than initially envisaged within and external to the JORC boundaries modelled, clearly justifying a priority drilling program targeted before year-end to aid in proving up a JORC compliant indicative resource.”