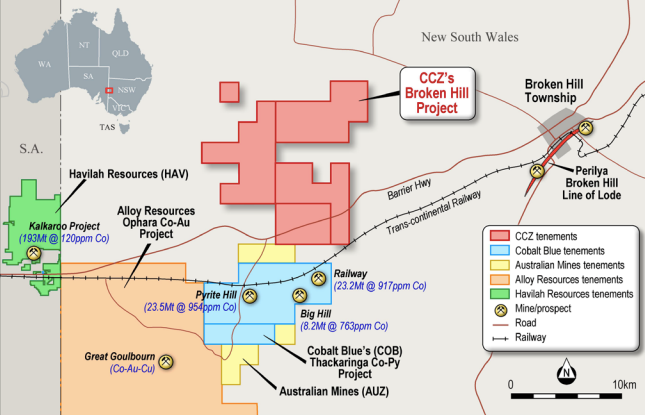 With the cobalt price sitting at around US$85,000 per tonne, CCZ is keen to fast-track its exploration program to ascertain the full extent of cobalt mineralisation across the tenure, with a core focus on targeting known host mineralised areas.

Of course, as with all minerals exploration, success is not guaranteed — consider your own personal circumstances before investing, and seek professional financial advice

Interestingly, there is also material exploration upside within the tenure, as some 75 per cent is covered in alluvial sand, especially significantly where the outcrop is visible, with legacy assay results indicating the presence of cobalt.

To uncover incremental target areas of sulphide-hosted cobalt mineralisation below the alluvial sand, CCZ plans to deploy heliborne electromagnetic geophysical survey technology – this has been successfully utilised by both COB and AUZ. Also beneficial for CCZ is that extracting cobalt from sulphides is proven to be materially simpler and more cost effective than laterites.

Importantly, re-opening the Cangai Copper Mine remains CCZ’s primary focus, with the second drilling campaign set to target supergene ore – an update on legacy stockpiles is expected in the near future.

CCZ chairman, Peter Meagher, said: “With the cobalt price around US$85,000/t, the board has mandated Xplore Resources to fast-track understanding the extent of cobalt mineralisation and develop the inaugural drilling program for our Broken Hill asset.”

“Indeed, the board is cognisant the region is emerging as a new potential supply chain hub for cobalt which augurs favourably for CCZ, particularly given its proximity to peers with defined JORC resources.”

“CCZ believes focusing on reopening the Cangai Copper Mine and concurrently gaining a deeper understanding of the cobalt potential at the Broken Hill asset are key forward value drivers,” added Meagher.