Castillo Copper Limited (ASX:CCZ) has this morning announced that the geology team on site at its Broken Hill Project is undertaking mapping reconnaissance and geochemistry work across six highly prospective target areas known to have the Himalaya Formation.

CCZ’s holdings are situated in close proximity to Cobalt Blue’s (ASX:COB) 60 square kilometre Thackaringa deposit, which hosts 61,000 tonnes of contained cobalt. The six identified sites have the same geological sequence, being the Himalaya Formation, as the Thackaringa deposit — making them prime targets for CCZ.

Further, this type of cobalt mineralisation is attractive because it is amenable to extraction, which could result in a more cost effective and fast-tracked operation.

The objective of this current program of work is to gather enough first-hand data to design the inaugural cobalt-focused drilling program at the Broken Hill Project.

CCZ’s project is situated 17 kilometres west of the historic Broken Hill mining centre, within a prolific region of NSW steadily emerging as a hub for battery metals. Broken Hill in particular is thought to contain one of the largest undeveloped cobalt reserves in the world, however previous exploration in the area has predominantly focused on zinc, lead and gold.

While CCZ’s key overall objective at present is to re-open the Cangai Copper Mine, the impetus to gather first-hand understanding of the geology at the Broken Hill project is now critical with the region’s growing profile as an emerging cobalt supply chain hub.

The priority cobalt targets relative to the Himalaya Formation are mapped below: 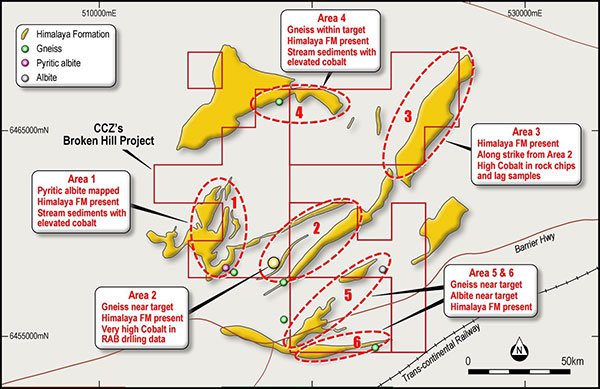 The six targets were selected following the in-depth analysis of several data sets which were compared to peers’ deposits with known geology and confirmed cobalt mineralisation.

Once the initial field reconnaissance has been completed, CCZ will undertake a follow-up sampling program.

With the price of cobalt in the vicinity of US$85,000/t, CCZ is taking steps to expedite its exploration program in order to confirm the full extent of cobalt mineralisation across its landholdings as soon as possible. 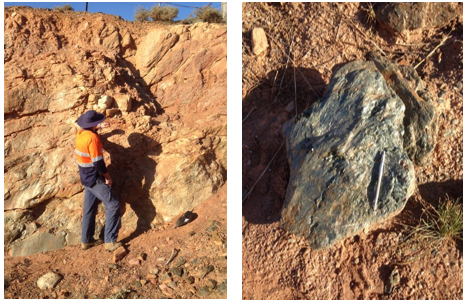