The receipt of positive geological and laboratory results from its Broken Hill tenure, along with a successful site visit, have boosted Castillo Copper’s (ASX:CCZ) confidence that a substantial cobalt project should be pursued.

Castillo owns one of the largest mineralised footprints in the Broken Hill region and 100 per cent of all mineral rights.

The ground is prospective for cobalt and other base metals, prompting management to expedite an exploration program with a view to developing a cobalt project.

Cobalt mineralisation consistent with other projects

The Broken Hill tenure has traditionally been explored for minerals usually found in that region such as zinc, lead, copper and silver.

While cobalt surface readings have been recorded on a cumulative basis, they have not been the focus of previous exploration campaigns.

However, the majority of the tenure, which is circa 125 square metres in total, remains clearly under-explored which bodes well for exploration upside.

Adding further weight to Castillo’s confidence is the identification of the same related cobalt mineralisation which is prevalent at Cobalt Blue’s (ASX:COB) Thackaringa project.

The following map shows the location of Castillo’s Broken Hill tenure, as well as illustrating the Himalaya formation areas that are of particular interest to the company. 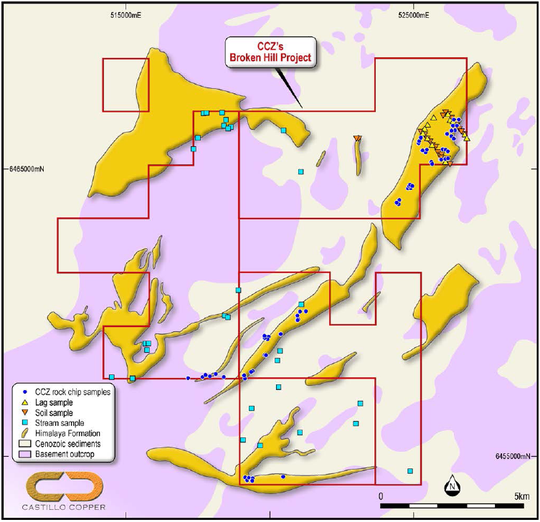 More than just a nearology play

There are plenty of explorers looking to ride on the coattails of the cobalt rush by pointing to the fact that they have tenements in prospective regions.

However, Castillo has more than that.

Castillo was able to correlate the mineralogy of the Area 1 sample to the known mineralisation at COB’s Big Hill deposit, thereby definitively proving the geology sequences to be comparable. 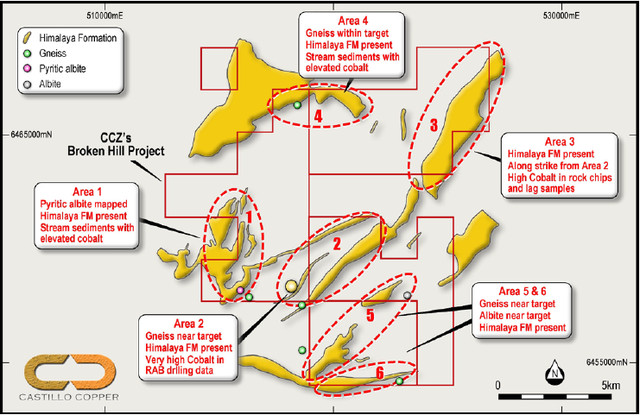 Should the company’s exploration program uncover further evidence of mineralisation consistent with that at Cobalt Blue’s Big Hill deposit, it could provide significant share price momentum.

Highlighting the potential exploration upside for Castillo, the Big Hill deposit has a total JORC (2012) resource of 10 million tonnes at 697 parts per million cobalt, comprising 6700 tonnes of contained cobalt.

Exploration success and the establishment of a resource underpinned an eight-fold increase in Cobalt Blue’s share price in the period between November 2017 and April 2018.

With the outcropping Area 1 already mapped, the next phase is to progress a soil sampling program over the other remaining prospective areas, especially as most of the Himalaya Formation within the tenure is not exposed at surface.

The core objectives are to confirm and constrain mineralised zones by detecting trace cobalt values in overlying soils which have been transported to surface through weathering processes.