Castillo Copper (ASX:CCZ) reports that it has been cleared by the NSW mining regulator to progress the Phase II drilling campaign at Cangai Copper Mine in northern NSW.

The regulator has approved the 39 drill hole Phase II RC drilling campaign at Cangai, which covers three primary zones along the line of lode that the geology team are planning to drill.

The upcoming campaign builds on the Phase I program and should significantly broaden the geology team’s understanding of mineralisation apparent within the system.

The Cangai Copper Mine has drawn favourable comparisons to one of the Asia-Pacific region’s premier, high-grade copper mines in $1.5 billion-capped Sandfire Resources’ (ASX:SFR) DeGrussa Copper-Gold Mine in WA. This comparison stems from the fact that both hold super gene and massive sulphides.

You can read more about Cangai and its similarity to DeGrussa in the Next Mining Boom (a related entity of S3 Consortium) article: CCZ’s Phase 1 Assay Results Similar to Sandfire’s Mineralisation.

In that article, The Next Mining Boom explore how CCZ shares similar supergene ore and high grade copper with the $1.5 billion capped Sandfire.

Key targets areas for CCZ are supergene ore near the legacy workings and where massive sulphides were identified during the Phase I program. Once this second drilling campaign concludes, the geology team anticipates the resource size may potentially be materially expanded.

In preparation for the campaign to start, land clearing is already well underway. Furthermore, the drilling contractor has visited the project reviewing access routes and planned drill pads, so that work can commence as soon as practical.

It should be noted that CCZ is an early stage play and anything can happen, so seek professional financial advice if considering this stock for your portfolio.

CCZ’s geology team have put a significant amount of work into planning the Phase II drilling campaign so that the company can build a greater understanding of the underlying mineralised system. The reasons for targeting three specific areas — Greenburgs, Volkhardts, Marks, and McDonoughs — around known lodes.

These target areas are mapped out below, followed by a more detailed summary of each. 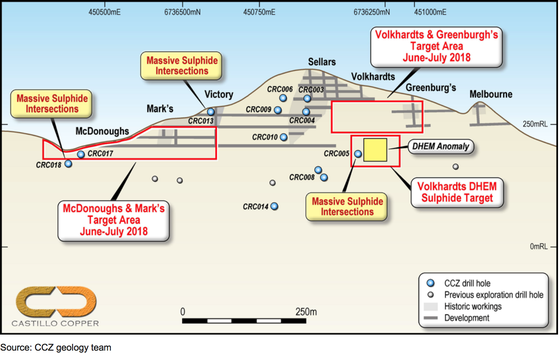 This is a blind lens discovered along strike to the east of the Sellars and Volkhardts workings. According to legacy reports (Carne 1908), Greenburgs was reputed to be the largest ore lens discovered at CCM until it was replaced by a horizontal fault. With only limited exploration undertaken, the geology team believe additional ore lens remains undiscovered and, hence, qualifies as a shallow target of interest for the Phase II campaign.

This is immediately to the east of the central Sellars workings area and where the main shear splits into two parallel shear zones (10m apart). This main shear splitting resulted in the grade in the original mine dropping below the 10% Cu threshold desired in the 1900's. The geology team believe current economic grades and widths exist between the two parallel shears which make it a shallow target for the upcoming Phase II drilling program. Moreover, beneath the Volhardts workings is where a DHEM target has been identified from the Phase I drilling campaign.

This was the principal ore lens on the western side of the main Sellars workings (Figure 2), which is why it is a target. However, mining operations ceased when the grade dropped below 10% Cu. According to legacy mine records, the width of the ore body remained consistent, although at depth it comprised mainly second grade ore (i.e. less than 10% Cu).

This was the last ore lens found during the A-level adit development at the western end of the mine. Limited information is available on this ore lens, although it was in production until the mines closure, explaining why it is an area of interest for the geology team.

Here is a cross section of key ore bodies: 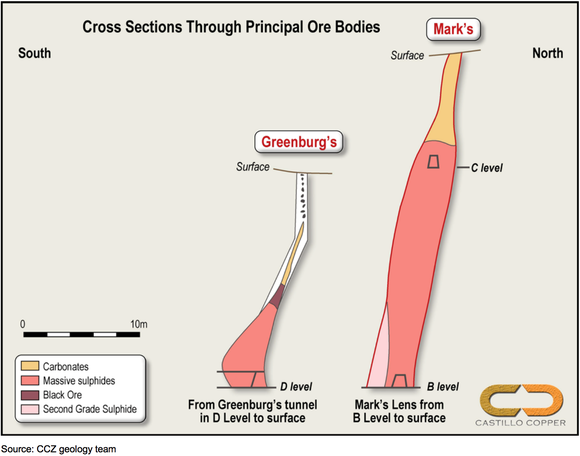 CCZ Chairman Peter Meagher commented: “Regulatory approval to commence the Phase II drilling campaign heralds another significant milestone towards the Board’s strategic goal of re-opening Cangai Copper Mine. The Board is confident the geology team have mapped out a comprehensive drilling program, targeting supergene ore and massive sulphides that has the potential to expand the resource size.”

CCZ also intend to monetise legacy stockpiles along the line of lode and at Smelter Creek. Considerable work has already been done and some key assay results for Smelter Creek have been finalised that confirm significant mineralisation. The best results from the samples, which was from channel trenching, were up to 5.58% copper, 3.31% zinc and 1,350ppm cobalt. 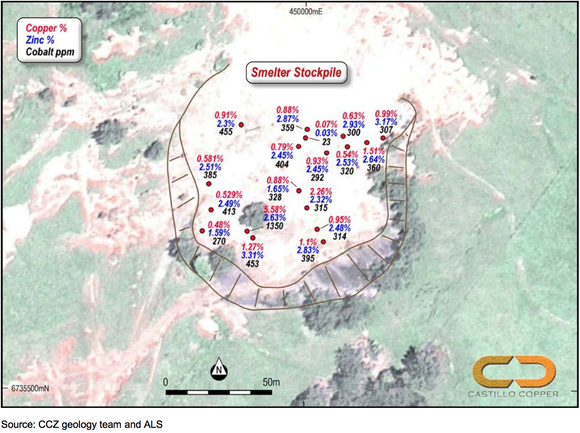 In addition, from ten hand-picked rock specimens from around the Volkhardts stockpile, which included malachite and gossan, a reading of 23.9% copper was recorded — a reading that is consistent with supergene ore grades. The laboratory is still optimising metallurgical test-work which is yet to run its course, while discussions with prospective off-take partners are ongoing.

CCZ note that with work on the Cangai Copper Mine progressing on several fronts, its next focus will be an update on the company’s Broken Hill project.