With the diamond drilling results having delineated broad widths of high-grade mineralisation at depth extremely significant in terms of growing the deposit size and grade.

This news saw the company shares rallied more than 10% on the open, but broader market weakness erased those gains.

However, there are numerous share price catalysts on the horizon for Carawine, and today’s results represent another building block in terms of developing the project.

The results were from a drill hole targeting the first of several magnetic anomalies, intersecting alteration typically associated with fertile copper-gold porphyry systems.

Management is now weighing up the possibility of undertaking extensional drilling and/or deeper drilling in order to identify the interpreted porphyry source.

From a broader perspective though, the results are encouraging because they support the potential for other magnetic targets in the region to be associated with porphyry-related mineralisation.

The aforementioned drill results were from diamond drill hole H8DD022, but it is also worth noting that holes H8DD023 and H8DD021 as shown below have given management confidence that it is on track in search for a copper-gold porphyry system. 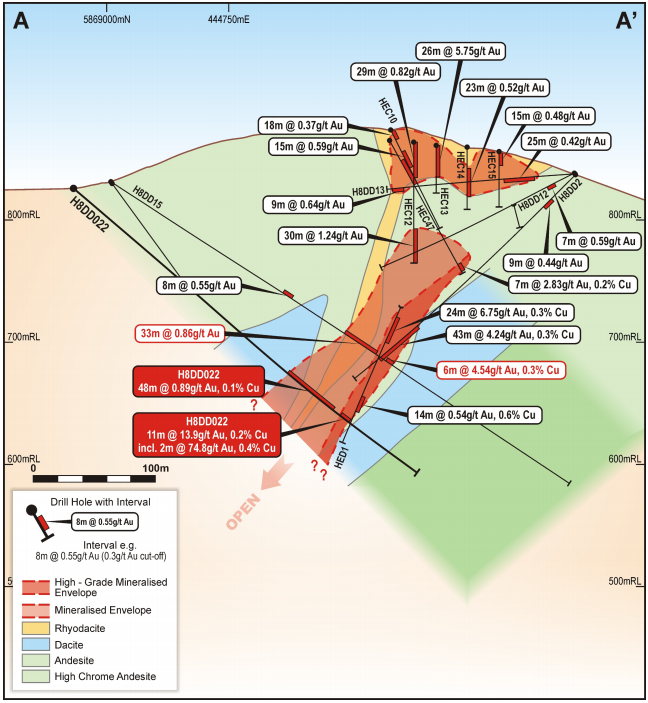 Carawine teams up with Rio and FMG in Fraser Range

Management will now focus on advancing exploration at Carawine’s Paterson and Fraser Range projects in Western Australia where its joint venture partners have indicated drilling and geophysical programs are planned to commence later this quarter.

Carawine will also advance its 100%-held tenements in the Fraser Range and Paterson provinces, with target generation activities already in progress.

In the Paterson region, Rio Tinto Exploration is currently processing the results of an airborne geophysical survey flown late in 2019.

Drilling of the Javelin, Discus and Wheeler coincident magnetic/gravity anomaly targets in the Baton tenements is planned to commence next quarter, along with ground geophysical surveys over the Red Dog tenement, indicating Carawine has plenty of news flow on the horizon.