Can Aldoro replicate the success of Chalice Gold Mines?

Aldoro Resources Limited (ASX:ARN) has made an impressive start to 2021, on the back of a strong six months which have seen its shares double in the last six months.

The strong interest in Aldoro has stemmed from the commencement of major exploration work at its Narndee Igneous Complex, a world-class jurisdiction where it holds four exploration licences totalling approximately 500 square kilometres.

The company is well funded to undertake this multi-faceted first stage of exploration with cash of $2.2 million.

The potential for exploration success has been strengthened by results released today from a High Power Fixed Loop Ground EM (FLTEM) survey which remains ongoing, but has delivered promising early-stage information in terms of the identification of potential targets at the Narndee Project.

The following diagram shows the relative locations of the 11 FLTEM blocks that will be surveyed, shown with their associated VTEM anomalism. 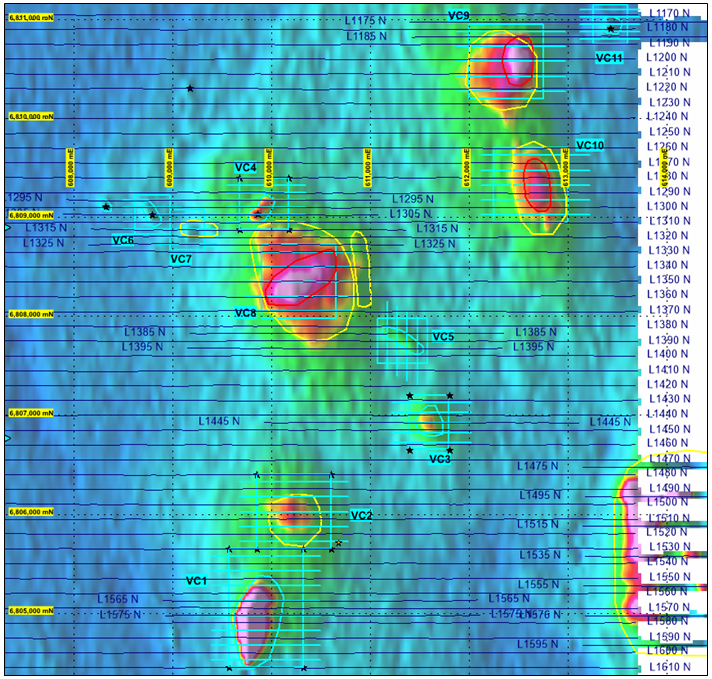 The first 4 EM targets (VC2, VC3, VC5 and VC8) have been surveyed with target VC5 delivering a formation that points to the possibility of an anomaly system with a confirmed bedrock conductor, and this warrants further investigation.

Target VC3 demonstrated moderate conductance that will update the source, depth, geometry, and conductance levels, and management believes there is value in conducting a planned 2DIP survey to gain a better appreciation of this target.

Is Aldoro the next Chalice?

From a broader perspective, the Narndee Project in the Murchison Region is 400 kilometres north-north-east of Perth, and the combined Narndee-Windimurra Complex is the largest layered mafic-ultramafic complex in Australia.

While the geological terms will be foreign to some, suffice to say that the mineralisation is consistent with that which hosts nickel sulphide discoveries, but more notably, a specific type of nickel-copper resource that can also include platinum group elements (PGE).

If this is sounding familiar you shouldn’t be surprised as it is the tenor of mineralisation that was discovered by Chalice Mining Limited (ASX: CHN) in 2020, triggering a 3000% share price gain. 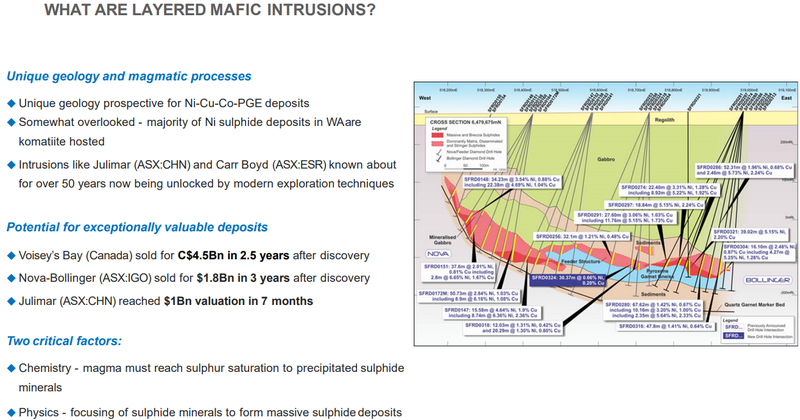 Whether Aldoro can emulate Chalice’s achievements remains to be seen, but the company has made an excellent start, giving itself every chance to succeed by using new age exploration methods to gather unique and comprehensive data from one of the few known large areas of this type of mineralisation in Australia.

Aldoro is well-positioned to conduct an extensive exploration campaign with sufficient funding to progress the project through to 3D modelling and commencement of the drilling program.

Further, the company has a tightly held register of high profile shareholders who have demonstrated that they are in there for the long haul.

As global nickel demand is expected to grow exponentially over the next 10 to 20 years, Australia’s brownfield and greenfield projects are likely to be viewed as one of the key sources of supply in a high demand-driven pricing environment where there are already early signs that nickel as a commodity is being stockpiled.

Such has been the strength of demand in the last 12 months that the nickel price has surged from approximately US$5.00 per pound to hit a recent high of US$8.83 per pound, a level it hadn’t traded at since 2014.

While there has been a retracement in the nickel price in the last two weeks, it is still trading at a premium of 50% to where it was in March 2020. 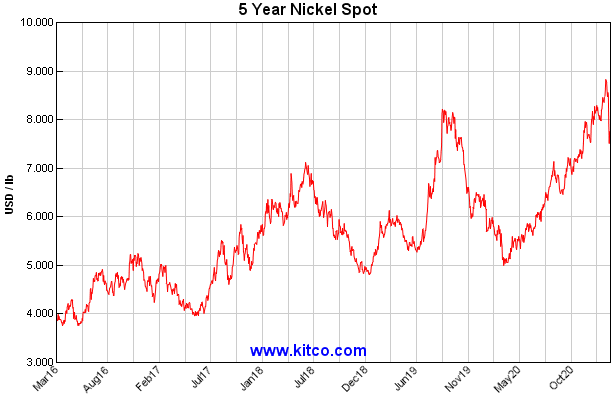 As preliminary work was taking place at the Narndee Project, Aldoro’s management discussed some of the key factors in saying, “This is an incredible project for a small company like Aldoro to have ‘in the locker’.

"Historic exploration demonstrates a working sulphide mineral system but the exploration generally applied, and was hampered by, a rigid Bushveld-model, looking for PGE reef deposits in a passive magma environment.

"Aldoro will use modern thinking and exploration techniques, with the likes of the planned high-powered VTEMTM Max survey, to focus on magmatic nickel-copper sulphides and attempt to locate possible constrained magma feeder conduits or chonoliths - host to deposits such as Nova-Bollinger, Voisey’s Bay and Julimar - in this type of layered mafic-ultramafic geology.

"This is a genuine company-making opportunity.’’ 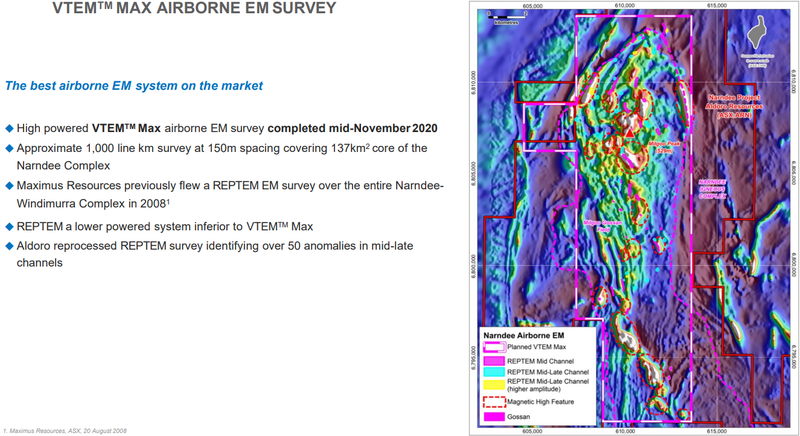 The type of layered mafic-ultramafic geology is targeting is akin to recent nickel sulphide discoveries, such as Chalice Mining’s Julimar discovery, as well as other globally significant deposits such as Nova-Bollinger (ASX: IGO).

The combination of nickel, copper and platinum group elements are characteristic of Chalice Gold Mines’ Julimar discovery, a development that began to look highly likely in March 2020 and culminated in a discovery hole in April that intersected both massive and matrix sulphides over significant intervals.

Chalice’s share price started to move in mid-March last year on the back of expectations, and since then it has had a virtually uninterrupted run from 16 cents to a recent high of $4.92, representing an increase of approximately 3000%.

While it is too early to suggest that Narndee might be the next Julimar, initial signs suggest the geology is right, and management’s attention to preliminary exploration work has been extremely fastidious.

Aldoro has not only used traditional electromagnetic surveying technologies to generate potential targets, it is meshing that information with more precise data using 2DIP induced polarisation that assists in differentiating targets that possess the genuine features that are characteristic of Julimar type mineralisation, while dispensing with what could be called false positives where anomalism is due to other conductive materials such as saline waters.

This process will be undertaken in the next four weeks, paving the way for a highly anticipated drilling campaign.

Because the targets to be drilled will be delineated by using this more precise and advanced technology it could be argued that there will be a greater degree of confidence in exploration success.

During the June quarter, management expects to be reviewing multiple geological and geophysical layers to identify high priority drilling targets, and at this time the company will assess additional surveys to further de-risk prior to drilling.

The initial drill plant will consist of one or two diamond core holes per target as the company aims to access areas at depth for the downhole IP survey.

The core from the initial drilling will also provide a better understanding of the electromagnetic conductors and mineralisation at bedrock.

By performing downhole electromagnetic the company aims to increase resource intersections and from a broader perspective, reduce the number of holes required to be drilled.

In summary, this is how management sees the June half unfolding.

Potential to strengthen balance sheet through divestment of gold assets

While the immediate focus has turned to the Narndee Project, Aldoro also has a number of other gold and nickel-focused projects in Western Australia. 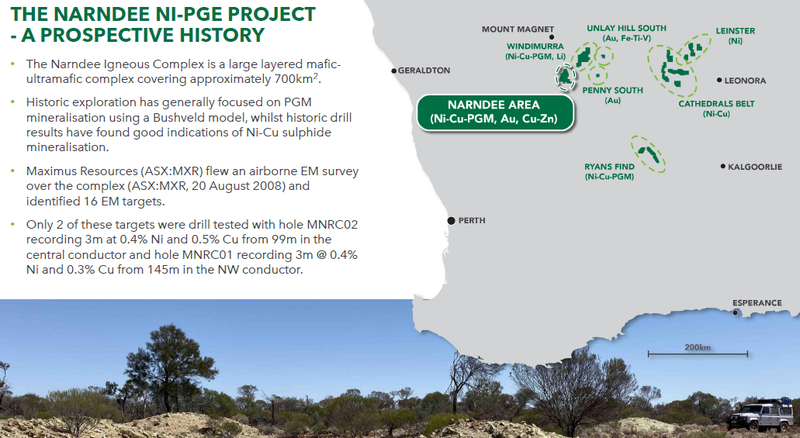 Consequently, Aldoro is positioned to align its strategy with a variety of potential commodity price scenarios.

Further, it is leveraged to the best performing base metals in nickel and copper with both of these expected to see an acceleration in demand as the electric vehicle industry shifts up a gear.

Given all of Aldoro’s projects are located in Australia, there are foreign exchange benefits that translate into particularly strong nickel and copper prices in Australian dollar terms.

As management has discussed, the group’s gold assets could selectively be divested with a view to strengthening the balance sheet and establishing a more focused operation with additional cash to fund an aggressive exploration program.

On this note, the company has a tight capital structure, providing scope for capital raisings through the issue of more shares that would not be too onerous.