Bowen Coking Coal Ltd (ASX:BCB) has made substantial progress on many fronts since Finfeed first featured the company in mid-March.

At that stage the company’s shares were trading at 2 cents, but have since hit a high of 5.9 cents, representing a gain of nearly 200%.

This has been driven by a range of factors including recognition of the company’s high profile coal assets which lie in one of the best coking coal regions in the world, exploration success and more recently confirmation of coal quality.

There has also been an acknowledgement that Bowen Coking Coal has one of the best executive teams in the business.

Stanmore also operates in the Bowen Basin, and investors have flocked to the stock in the last 12 months with its shares nearly doubling from about 80 cents to a recent 12 month high of $1.55.

In what could be seen as a show of confidence in Bowen’s prospects, former chairman of Stanmore Neville Sneddon is now non-executive chairman of BCB, joining forces with Jorrs to build something bigger and better than Stanmore.

The company has certainly demonstrated that it has the resource quality to deliver some of the best quality coking coal in the world to export markets.

In short, users want a coal that will burn at high temperatures, and also possesses few impurities such as ash, sulphur and phosphorus.

‘’This is another positive surprise given the June month is the beginning of an off-season for producers.

‘’That said, it also reflects producer’s confidence about demand in futures.

‘’For commodities with strong fundamentals, the increase in production reflects an improvement in underlying demand.

‘’In view of this, we remain positive on iron ore, bauxite, copper and coking coal and bearish about thermal coal and aluminium.’’

BCB’s results for the three months to 30 June, 2019 also contained some interesting commentary on dynamics in metallurgical coal markets.

The following is an excerpt from the report where information was sourced from the Department of Industry, Innovation and Science.

Steel production, of which metallurgical coal is a key component, is on track to set another record high in 2019 mainly based on Chinese production fuelled by Government stimulus and tax cuts.

India and Japan’s metallurgical coal imports have been lower than expected during the first half of 2019, but India’s imports are still expected to grow at an average annual rate of 5.2% to reach 70 million tonnes by 2021.

Hard coking coal prices remained strong during the quarter with an average of US$198 per tonne foreseen for 2019 based on tight supply.

Supply constraints are however expected to ease towards the end of the year and into next year, mainly resulting from supply growth from new producers.

It is important to note the emphasis on demand for coking coal, as some recent price weakness which arguably relates more to thermal coal appears to be the source of some negative sentiment towards established and emerging coking coal producers such as BCB.

The following graphic highlights four key components that international coal buyers look for in determining the product best suited for their smelters, with the blue diamond indicating how BCB’s Cooroorah coking coal stacks up. 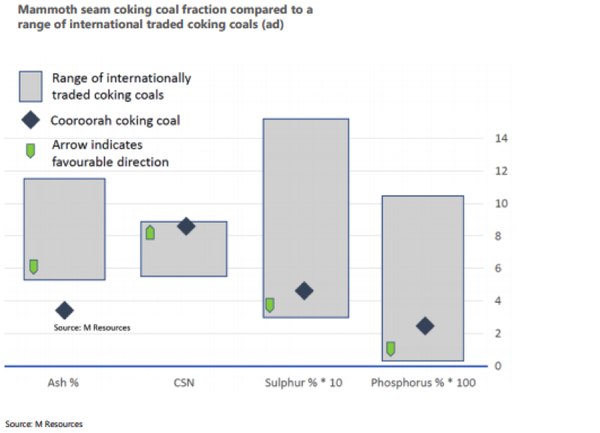 Analysis conducted to date suggests exceptional coking coal from the Mammoth seam at Cooroorah where the group has a resource of 177 million tonnes contained in 4 thick seams at a depth of about 280 metres.

From a technical perspective, PCI provides a supplemental carbon source to speed up the production of metallic iron, reducing the need for coke production, resultantly reducing energy use and emissions.

Cooroorah is also adjacent to the Jellinbah Mine (Anglo, Sojitz and Marubeni) that produces low volatile PCI and Semi-soft Coking Coal.

Commenting on the quality of coal from the Mammoth seam, M Resources,a well-credentialled trader and consultant who specialises in metallurgical coal supply to steel mills described the product as ‘’attractive, with high calorific value and low sulphur and phosphorus content. The coke replacement ratio is high, placing the product in a similar class to the well-established ULV PCI coals.”

Given these dynamics, it isn’t surprising to see that the share price of BCB (+141%) has even outperformed the highflying Stanmore Coal (+68%), as well as another player in that broader region in TerraCom Ltd (+19%).

Prioritising premium projects is the key

BCB is spoilt for choice when it comes to development options as the company has two other wholly-owned projects in Isaac River and Mt Hillalong with the latter lying to the north of Isaac River and the Goonyella rail line which provides the link to both the Dalrymple Bay and Hay Point shipping terminals. I caught up with BCB’s managing director, Gerhard Redelinghuys and Nick Jorrs at last week’s Noosa Mining Conference which provided the opportunity to get a feel for the strategic direction management is considering.

Given that BCB is able to generate near-term cash flow from Isaac River via a staged process, they said that the company would target the ‘’low hanging fruit’’ at this project as a scoping study had confirmed the positive business case for a first stage project.

This would involve the development of a shallow open pit resource of 5 million tonnes of good-quality coking coal while the company undertakes further exploration to determine the coking coal potential for stage II.

Management flagged an imminent update in relation to the Isaac River resource, and this could be a significant development in terms of the valuation attributed to the asset, as well as the strategic benefits that may unfold with regard to the development of a two-stage project.

During the June quarter, BCB completed the maiden drilling program at Isaac River.

The objective of the exploration program was to test the coal quality from the previously untested Vermont upper seams as well as testing fresh samples from the Leichhardt seam for coking properties, previously defined as a PCI or a semi-soft coking coal with secondary thermal.

Target seams were intersected at all six drill sites as indicated below. 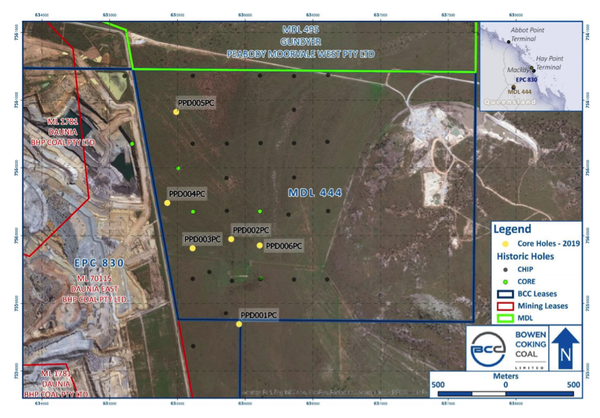 The results were extremely positive, with initial indications (subject to washability tests) suggesting the Vermont Upper 2 seam as well as the bottom section from the Leichhardt seam may be able to produce a high-quality coking coal with raw CSN numbers (crucible swelling) as high as 8 being observed, one of the key qualities for coking coal.

Xenith Consulting has commenced an update of the geological model and will conduct a revision of the Coal Resource estimate for the Isaac River Project. 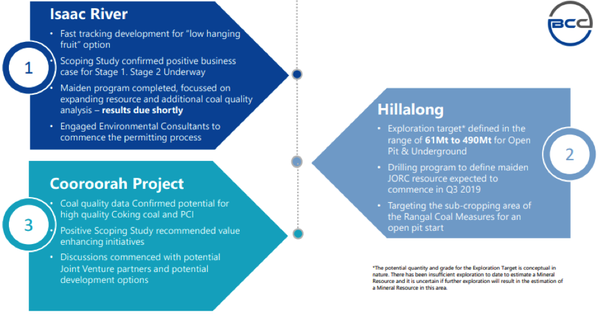 BCB pointed to key activities in relation to these projects in its June quarterly.

Depending on final access agreements being reached with the landowners, exploration is expected to commence at the Hillalong South target, followed by the Hillalong North target, both focused on the potential open pit resources.

Management has reached in principle agreement for access on Hillalong South and is awaiting cultural heritage clearance before engaging the drilling contractors.

BCB is planning a circa 3100 metre 2D seismic program in the north of the tenement, mainly over the Mammoth seam resource area closest to the interpreted Jellinbah fault.

The intent of the program is to provide more confidence on the fault’s location and potential secondary faulting in the area, which is critical for underground mine planning.

With numerous share price catalysts on the horizon, BCB shapes up as one of the best emerging players in the coal space, particularly given the premium prices normally achieved for high quality Bowen Basin coking coal.