Boss Resources (ASX:BOE) announced on Monday morning that it had completed an expansion study which indicates the potential for a highly economic operation at its Honeymoon uranium project.

This is a significant development for BOE which could be termed a game changer given that it was a make or break determinant as to whether the company had a commercially viable asset.

However, BOE is still an early stage play and this should be taken into account when considering this stock for your portfolio. Consider all information about BOE and seek professional financial advice.

The company already had a significant advantage over most emerging players in the uranium space in that it had a large resource with established power, water and transport infrastructure, as well as important plant and equipment with a sunk value of $146 million already on site.

At this point it is worth noting that BOE’s current share price of circa 5.2 cents implies an enterprise value of approximately $44 million, effectively applying minimal value to the infrastructure on hand and no value to the recently enlarged mineral resource of 57.8 million pounds.

Analysts at Patersons established a net asset valuation of $235.7 million when reviewing the stock in late August. This followed a site visit to the Honeymoon project located in South Australia.

Analyst, Simon Tonkin, was very impressed with what he saw, saying, “Overall, we see Boss Resources’ (BOE) Honeymoon uranium project as one of the most attractive uranium development assets on the ASX”.

He said the project has significant advantages over its peers with an existing processing plant and infrastructure, as well as all the necessary permits to mine, process and export uranium.

He confirmed that BOE was looking to scale up the project to reduce costs and allow the project to achieve profitability in the current uranium price environment and discussed the likelihood of using a combination of resin technology in the recovery process with existing solvent extraction processing to optimise recovery.

The following model fleshed out by Tonkin demonstrates the highly profitable metrics of the Honeymoon project. A maiden profit of US$14.1 million is forecast in 2020, increasing to circa US$41 million in 2021 and beyond. This is equivalent to approximately AUD$53 million, further reinforcing the fact that the group’s enterprise value is well short of fair value. 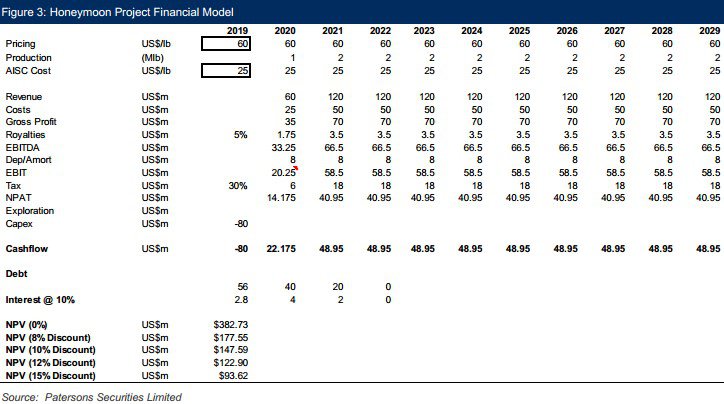 Harking back to today’s news, the expansion study has provided the necessary confidence for the company to proceed to the next phase of study (PFS) with the decision to mine expected by the end of 2017.

Front and centre will be BOE’s new processing solution referred to as a hybrid ELUEX method which will enable the company to produce at steady-state operating costs of US$24 per pound U308 equivalent.

The next phase of the activity will also include exploration of the circa 2600 square kilometre tenements, which based on success to date and the establishment of a large resource can definitely be described as highly prospective.

Overall, 50% of production for the first nine years can be sourced from the measured and indicated resource.

While the company’s shares increased four-fold between October 2015 and April 2016, a lack of news flow since then has seen them taper off slightly, perhaps presenting a buying opportunity in the vicinity of 5 cents per share.

It is worth noting that Patersons valuation and price target of 16 cents implies upside of more than 200% to Wednesday morning’s opening price of 5.2 cents.

However, uranium stocks can be hard to get your head around and there have been far more flops than successes, making it essential to get an understanding of just what you are investing in.

The following is a thorough profile of the project, its history and the progress made to date. It is well worth examining to gain an understanding of the asset and the impressive inroads management has made.

The Honeymoon is far from over 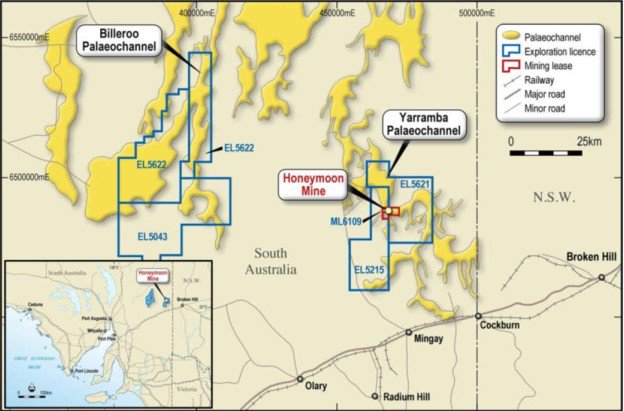 The Honeymoon Uranium Project is located in South Australia and is 80km north-west from the town of Broken Hill near the SA / NSW border.

Mining and uranium export permits (both State and Federal) are still valid which means production at the original design throughput can commence at Honeymoon with a very short lead time.

Prior to the start of this Expansion Study (and as part of the purchase due diligence exercise) a detailed technical review was undertaken to identify the issues that impacted the plant prior to being placed on care and maintenance, optimisation opportunities and cost reduction strategies that could form the basis for a planned redesign and start-up.

This assessment indicated problems with wellfield performance that led to lower feed grades to the plant and that further to this the plant production rate was too low, even if design throughput was reached, for a sustainably profitable uranium mine at current depressed uranium prices.

These economics were due to the sizing of the operation (0.88Mlbs/annum) which made the cost structure for Honeymoon inefficient, with a high proportion of fixed costs within the overall cash cost for the mine.

BOE therefore proposed that a larger processing plant facility, with the possible use of resin technologies, could significantly reduce the cost of production. In parallel with these investigations, the company announced a 330% total increase of the Global Honeymoon Resource based on a detailed review of the existing drilling data.

Importantly part of the resource increase comes from deposits located approximately 70 kilometres from the main processing plant. It is believed that these deposits could be effectively treated with the use of satellite ion exchange processing units.

As has now been determined, the preferred route identified based both on economics and project risk was a hybrid of the Eluex process that maximised the utilisation of the existing equipment at Honeymoon. This was then further developed to provide a base case to carry forward to the next phase of the Project (the Pre-feasibility Study).

At the same time possible production scenarios were assessed to determine an optimal ramp-up strategy and maximum final production capacity.

It should be noted that earnings forecasts, broker recommendations and price targets and past share price performances may not be met or replicated and as such should not be used as the basis for an investment decision. Seek professional financial advice.