Blackham Resources Ltd (ASX: BLK) has released results from its drill work targeting the down-dip extensions of the Republic Reef at the Matilda Gold Project in Western Australia.

The Republic Reef is about 1.5km from BLK’s Wiluna Gold Plant and of the three RC holes drilled so far, only RRRC0002 appears to have intersected the target zone, showing mineralisation of 5m @ 6.87g/t from 448m, including 2m @ 11.5g/t.

The three RC holes were drilled to a depth of 1,553 metres looking for similar structural extensions of the Republic Reef as that of the Golden Age system which produced 160,000oz @ 9g/t Au.

The Republic Reef was previously mined as a small open pit with limited deeper drilling. BLK’s drilling in the area is in line with this, as it focuses on free-milling gold targets and resources within open pit or shallow underground depths.

The funding facility is as follows:

The funding facility will then provide subsequent funding to the tune of $30,000,000 to be drawn in two tranches of $15M, for the development of the Matilda Gold Project.

As part of the multifaceted deal with Orion, BLK has also agreed for Orion to nominate one member of its Board.

Commenting on the facility, BLK’s Managing Director Bryan Dixon said, “We have achieved a great deal since first acquiring the Matilda Project in 2011. As part of our dilligent exploration work, we have grown our total gold Resource upto 4.7 million ounces, completed over 37,000 metres of drilling, carried out pre-feasibility level studies and completed an initial scoping study for the Matilda Gold Project”, before adding, “the funding facility provides a secure pathway to gold production at our 100% owned Matilda Project. Having achieved what we have in the past 4 years on a limited exploration and development budget, the $30+ million funding facility gives us a chance to step into higher gear”.

Final approval for BLK’s deal with Orion is with BLK’s shareholders who will meet at the company’s Shareholder meeting on July 27th 2015.

The Matilda Gold Project features more than 780km2 of tenements, including BLK’s Regent and the Matilda and Williamson Gold Mines. These contain JORC 2012 resources of 44Mt @ 3.3 g/t for 4.7Moz of gold within a 20km radius of BLK’s Wiluna gold plant, capable of 1.3Mtpa for over 100,000 oz production each year. 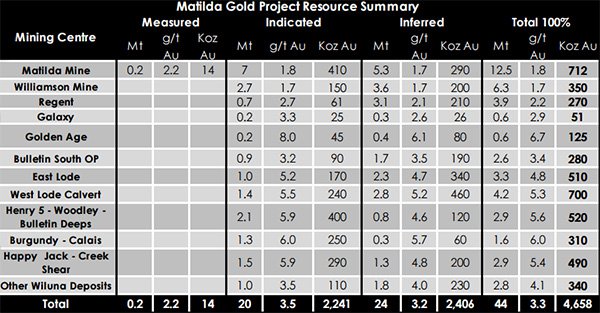 This is a 40% increase in indicated and measured ounces on the previous resource estimate for the Matilda Deposit, which is within the highly prospective Coles Shear, about 20km south of Wiluna. At the time of writing, BLK has a 2,000m diamond drilling program underway at the Matilda Mine and RC drilling is planned to infill the new zones.

Into a New G0lden Age

Dovetailing with other exploration activity, BLK recently received approval from the Department of Mines and Petroleum (DMP) to re-enter the Golden Age area of the Wiluna underground mine. BLK geologists are set to confirm suitable drill pad positions in the coming weeks with a view to further drill the extensions of both the Golden Age and Republic Reefs.

BLK intends to commence its maiden drill programme at Golden Age as soon as possible. 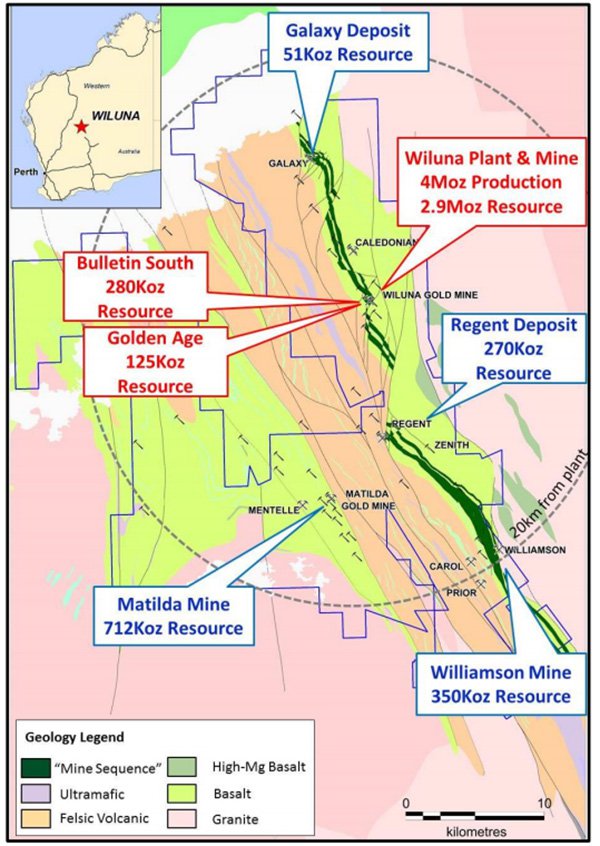 BLK has confirmed the successful implementation of the safety project management plan that facilitated detailed site inspections below ground. After extensive evaluation including a Geotechnical assessment, BLK personnel and independent technical consultants are confident the mine is ready for diamond drilling.

The intended drilling program is in line with BLK’s focus on free-milling gold targets and resources in open pit or at shallow depth.

Other Ventures, Something Gained

Recent financing and internal exploration news follows in quick succession to Rumble Resources’ (ASX:RTR) recent announcement regarding the start of its maiden drill program in joint-venture partnership with BLK at their Zanthus Project site in Western Australia.

The Zanthus project, around 1,363km2 in size, is about 18km east of the recently discovered Nova nickel copper massive sulphide find by Sirius Resources NL (ASX:SIR).

BLK retains 80% ownership of the Joint Venture with RTR retaining 20% but earning 75% of the proceeds. RTR has begun drill work by targeting a cluster of five bedrock conductors earlier this month. RTR expects to complete its diamond drilling schedule in the coming weeks and will inform the market of its findings thereafter.