This week, I had a chance to catch up with the managing director of Blackstone Minerals (ASX:BSX) Scott Williamson who explained the company’s strategy in bringing the former Ban Phuc Nickel Mine in Vietnam back into production.

The nickel mine successfully operated as a mechanised underground project from 2013 to 2016, but unlike the previous owners, Blackstone is aiming to produce a nickel sulfide rather than a concentrate for export markets.

This provides a number of advantages with one of the most prominent and easily understood benefits being the difference in taxation applied by the government of Vietnam.

Similar to a number of other Asian countries, Vietnam is looking to promote industry development around its rich resource base with a view to improving employment and boosting GDP.

The previous owners completed engineering studies for a sulfide nickel smelter with a view to reducing tariffs from 20% to 5%.

Blackstone is looking to progress this further given that the deposit has favourable metallurgical characteristics for downstream processing at relatively low costs.

On the score of costs, the manufacturing industry in Vietnam is an ideal location to establish downstream processing for nickel sulfide feed into Asia’s growing battery industry.

The company will be investigating the potential to participate in the production of a downstream nickel product for the lithium ion battery industry.

This could be done via a pressure oxidation process as illustrated below, a method employed by prominent Australian nickel producer, Independence Group (ASX:IGO). Interestingly, it was in April this year that LG Chem announced that it had established a joint venture with Vietnam’s VinFast Trading and production to produce lithium ion batteries for the Vietnamese carmaker’s electric scooters and electric vehicles.

Williamson said that other battery manufacturers are looking to follow in the footsteps of LG, particularly given the low cost of developing plants and modest wages that are central to Vietnam’s thriving manufacturing industry.

Blackstone entered a binding term sheet for option to acquire a 90% interest in the renamed Ta Khoa Nickel Project in Vietnam in May, and by July the company’s shares had doubled.

They have continued to trade strongly on the back of promising exploration results, also assisted by a strong surge in the nickel price in recent months.

It could be argued that nickel’s strong performance has been overlooked with most of the attention on gold, and perhaps an assumption that base metals generally stand to be negatively affected by geopolitical uncertainty.

However, the metrics for nickel look promising with five-year LME (London Metals Exchange) nickel warehouse stock levels at record lows as highlighted in the following chart sourced from kicometals.com. 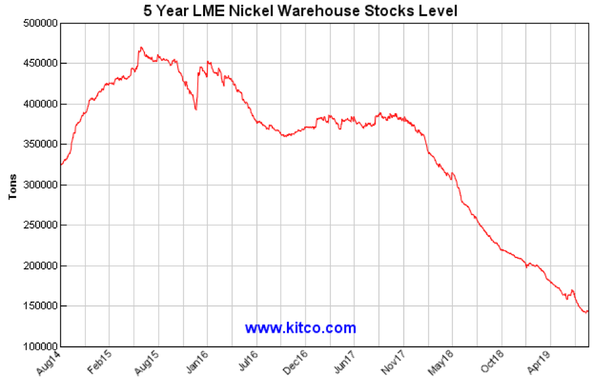 Williamson said that he sees significant long-term nickel price appreciation beyond current levels simply due to supply not being able to keep up with the substantial increase in demand.

When the Ban Phuc nickel mine was operated by previous owner Asian Mineral Resources more than $136 million in capital was invested in the project with a 450,000 tonnes per annum processing plant and modern mechanised underground mine constructed.

Over 20,000 tonnes of nickel and 10,000 tonnes of copper were produced during this time at a competitive US$2.35/lb nickel operating cost base before the project was placed on care and maintenance.

Around the midpoint of Asian Mineral Resources’ ownership, nickel was trading close to its all-time high, but in just over 12 months the price of the commodity had more than halved to less than US$4.00 per pound. 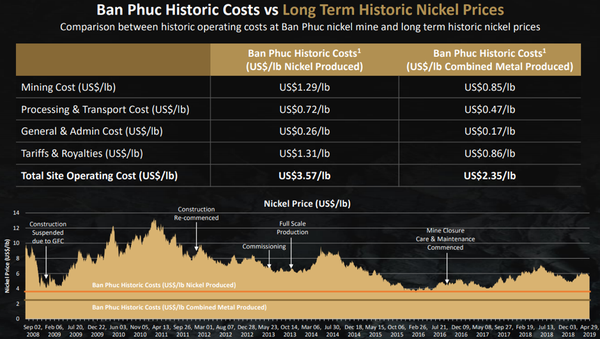 With nickel now trading in the vicinity of US$7.20 per pound, up 30% from approximately US$5.50 per pound only two months ago, the project being envisaged by Blackstone should deliver strong margins.

In fact, even based on the metrics illustrated above which relate to initial production at the Ban Phuc mine you can see that the current price reflects a level that is at the midpoint of when the group commenced full-scale production at the peak of approximately US$9.00 per pound in 2014 and the closure in 2016.

In 2013, a NI 43-101 compliant disseminated nickel resource was prepared by CSA Global for Ban Phuc with 20 million tonnes at 0.5% nickel being calculated at a 0.2% nickel cut-off.

This was prepared using an open pit (Kriging) method, illustrating the disseminated sulfides (DSS) and massive sulfide veins (MSV) across the 1.5 kilometres of strike length.

The presence of both types of mineralisation is important in terms of Williamson’s proposed exploration and development strategy.

He sees the potential to define and extract near surface DSS ore at low costs while also gaining an understanding of the prospect for underground development as the group’s identification and knowledge of MSV style mineralisation is enhanced.

Commercially mineable DSS grades have already been identified, but over the next six months Williamson expects to establish a Maiden JORC Resource and complete an open pit scoping study which will highlight the intended development strategy and the estimated financial returns.

Consequently, this is a vital period for Blackstone, and for investors considering the stock it is a case of determining whether to buy ahead of a potential rerating or to wait and crunch the numbers.

What the brokers are saying

In discussing the merits of Blackstone’s strategy, Canaccord resource analyst Larry Hill said “BSX is looking to position itself as one of the few ASX-listed nickel developers with a cost effective (as opposed to highly capital intensive HPAL) processing solutions to manufacture a battery grade nickel product.”

Hartleys resource analyst Paul Howard recently visited the site and he said, ‘’The resource has the potential to be economically mined as an open pit and is a great starting point for Blackstone.’’

Looking at potential production metrics, Howard said, ‘’In our view, payable production of 10,000 tonnes per annum nickel is worthwhile pursuing.

‘’To achieve this (assuming 70% combined recoveries and payabilities), we see the disseminated ore making up approximately 60% of the feed through an expanded 1.5 million tonnes per annum plant, topped up with still to be defined massive sulphide ore (40% of feed) at approximately 2% nickel.

‘’A 6-year mine life could justify the plant expansion, meaning BSX may need to uncover additional resources equivalent to another one or two Ban Phuc’s.’’

On the score of potential resource expansion, Howard said, ‘’Given there are 25 mapped massive sulfide targets within the project area, this would appear to be very much in the realms of possibility.

‘’We particularly like the King Snake prospect where previous drilling intersected 0.4 metres at 3% nickel and 1.1% copper (+Co & PGE).’’

In commenting on the political environment in Vietnam, Howard’s team met with the Provincial Government who in his words was ‘very supportive of the project, having received US$65 million in contributions when Ban Phuc was operational.’