Shares in Blackham Resources (BLK) continue to break new highs with the company’s shares spiking more than 5% on Monday morning, breaking through the $1.00 mark for the first time since early 2008. Its shares have more than doubled in the last two months on the back of strong exploration news and the commencement of mining at its Matilda project.

The key trigger for today’s rerating was news that the company’s Wiluna processing plant was on track to be commissioned in August.

It should be noted that share prices are subject to fluctuations and production goals may not necessarily be met and investors should take a cautious approach to any investment decision regarding BLK and not base a decision solely on the historical performances.

With the expanded Matilda gold project boasting 48 million tonnes grading 3.3 grams per tonne for 5.1 million ounces of gold, this is an important milestone for the group.

Blackham has already commenced open pit mining and underground development work at Matilda and the 100% owned Wiluna gold plant has the capacity to process up to 100,000 ounces per annum.

Management has established a strong track record of delivering on projected milestones and one of the most closely watched will be targeted gold production within three weeks. While this has been well flagged, it is not unusual for investors to respond positively to the event when it actually materialises.

With an eight year mine life across four substantial gold systems and an aggressive exploration program in place there is scope for important news flow. In the near to medium-term, management’s range of expansion studies are aimed at growing production to between 175,000 ounces per annum and 230,000 ounces per annum while better monetising the expanded output.

As can be seen below, Wiluna is key to the group’s expansion strategy and should strong news flow regarding robust grades continue, this is likely to be a positive share price catalyst. 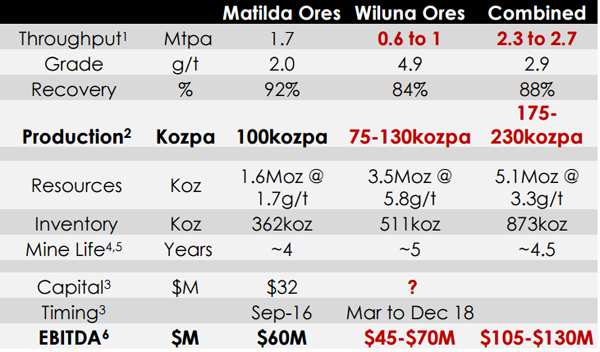