A previous assay result had even brought up a bonanza grade of 5.1m @ 198g/t.

The latest set of assays complete the maiden drilling program at Golden Reef, which is part of its overall Matilda Gold Project.

“The drilling at Golden Age has confirmed our understanding that this deposit has significantly further high-grade potential, that remains open, and has previously been conservatively modelled,” he said.

He said the higher grade Golden Age ore will be blended with Matilda open pit ore to increase the head-grade of the mill feed.

The Matilda Gold Project, near Wiluna in WA, has total resources of 44 million tonnes @ 3.3g/t for 4.7 million ounces of gold.

Gold mined at the main Matilda open pit will be taken to the 100% owned Wiluna gold plant, which is capable of 1.3 million tonnes of processing per year, or over 100,000 ounces of gold per year. 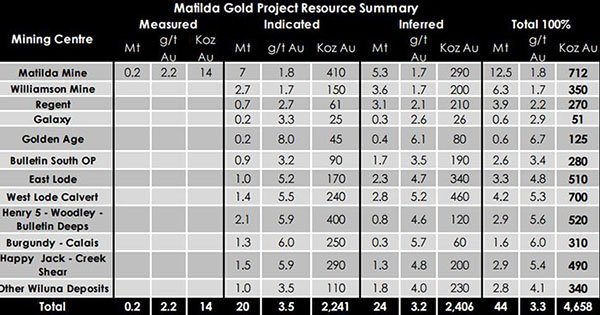