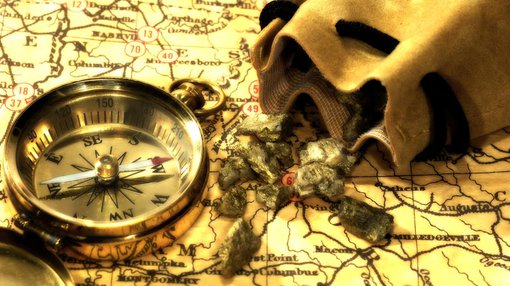 Australia’s next gold producer, Blackham Resources (ASX:BLK) has announced more high grade drilling results at its flagship Matilda Gold Project in WA. The junior explorer, soon-to-be producer, has also confirmed the receipt of $20 million in additional capital investment in order to refurbish the Wiluna Gold Plant and develop it into a productive asset by the end of Q3 2016.

BLK completed a highly-awaited Definitive Feasibility Study (DFS) on its flagship Matilda Gold Project last month and indicated to its shareholders that production could commence as soon as Q3 2016.

Maiden exploration drilling at BLK’s Bulletin Resource has proved up further high grade hits which has allowed BLK to officially upgrade the Resource at Bulletin to 1.6Mt @ 4.8g/t for 247,000 Au. The upgrade represents an increase of 40,000oz and a 41% grade improvement.

BLK told its shareholders that its diamond drill program was designed to “confirm the continuity of gold mineralisation between two historical stoping areas and the potential strike extension of the upper portion of the Bulletin deposit”. BLK drilled eight underground diamond holes for a total of 770m with “exceptional results” being seen including 11.5m @ 5.08 g/t.

As part of its development of the Matilda Gold Project, BLK’s intention is to move as much gold as possible from the Inferred to the Indicated category in order to further bolster the quality of its Matilda resource and improve its project economics in view of impending production later this year. Yesterday’s upgrade allows BLK to upgrade its Indicated resource to 0.9Mt @ 4.2g/t for 123,000oz – an increase of 50,000oz and a 33% grade improvement.

BLK’s recent exploration and finalized DFS has helped to raise BLK’s share price considerably with its shares seeing strong buyer interest since the start of the year. 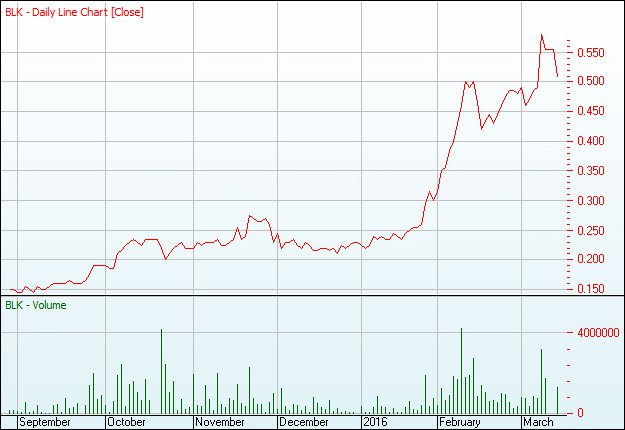 According to BLK, the Bulletin resource is a high-grade ore body located in the Bulletin Fault Zone of the Wiluna Fault System. Historical mining has focused on the broad high grade zones that extended to >600m below surface whereas Blackham is focusing on near-surface resources <500m below ground as a first port of call to boost its overall Resource at Matilda.

In related news, BLK has raised $20.3 million through a Placement to institutional investors. BLK says the raising was “strongly oversubscribed” with the funds going directly towards enabling the immediate refurbishment of the Wiluna Gold Plant – a critical part of the equation in BLK’s goal of becoming Australia’s next gold producer.

To facilitate the Placement, Canaccord Genuity acted as the lead manager with BW Equities providing brokerage. 45 million shares were issued at a price of $0.45 per share which represents a 9.9% discount to the 15 day VWAP prior to the Company entering into a trading halt on 9th March.

Just last week, BW Equities published a $0.75c 12 month price target on BLK. At the time of writing, BLK shares were trading at $0.51c per share.

BLK Managing Director Bryan Dixon said, “The funding allows the plant refurbishment to be fast tracked at the Matilda Gold Project and delivers additional financial strength and flexibility to Blackham.”

Blackham has only just begun to unlock the geological potential of the Matilda, Quartz reefs and Lake Way extensions and regional prospects. We will continue to strengthen and lengthen our reserves as well as ramp up our search for game changing discoveries in a gold project with a 9Moz gold endowment.”