Near-term gold producer Blackham Resources (ASX:BLK) now has more than 500,000 ounces of gold in reserve after number crunching on its Bulletin Resource at Matilda.

It told its shareholders in a note today that Entech Pty Ltd had crunched the numbers on exploration results at the Matilda Resource – focusing on the upper portion of the Bulletin mine plan.

Historically, mining at Bulletin had taken place at zones which extended to 600m below surface, but BLK said it would focus on shallower horizons as part of a low-risk start up strategy.

As a result of the number-crunching, the Bulletin sulphide Ore Reserve now stands at 938,000 tonnes at 4.7 grams per tonne for 142,000 ounces of gold.

The reserve differs from a resource, as a reserve typically indicates the amount of a resource which can be mined economically while a resource indicates a portion of a deposit which has a reasonable chance of being developed.

Thanks to the Bulletin upgrade, the entire Matilda project now has total reserves of 517,000oz. 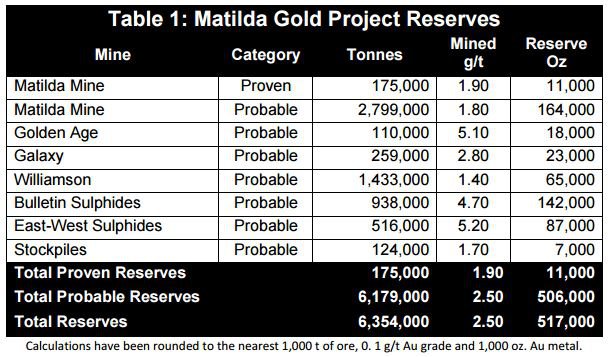 Meanwhile, the project now has an overall resource of 45 million tonnes of ore at 3.3g/t for 4.7 million ounces.

Of this, measured and indicated resources make up 21Mt @3.4g/t for 2.4Moz of the total.

The news of an increased reserve will be a boon for BLK as it hurtles towards first production of gold at Matilda within the next quarter.

BLK intends to produce around 100,000oz per year when it goes into production in the next quarter, offloading its mined material to the Wiluna gold plant which has a throughout capacity of 1.7Mtpa.

Matilda is located in Australia’s largest gold belt, stretching from Norseman to Wiluna.