Blackham Resources (ASX:BLK) continues to beef up its longer-term mining inventory – with a gravity and passive surveys firming up 25 new targets, 12 of which are “high-priority”.

As BLK rushes toward first gold production at its Matilda Gold Project in Western Australia, it has also begun a program aimed at extending the amount of inventory available to mine.

It has identified an area close to its existing Williamson and Regent deposits known as the Lake Way district.

It contains a salt lake, and therefore has proved difficult in the past to delineate a gold resource as the salt cover obscured previous surveys.

This means previous drilling done was broad based with limited multi-element analysis completed.

By conducting gravity and passive seismic surveys though, BLK thinks it may have cracked the code.

It has firmed up 25 target areas – including 12 areas BLK has labelled as targets for high-priority drilling. 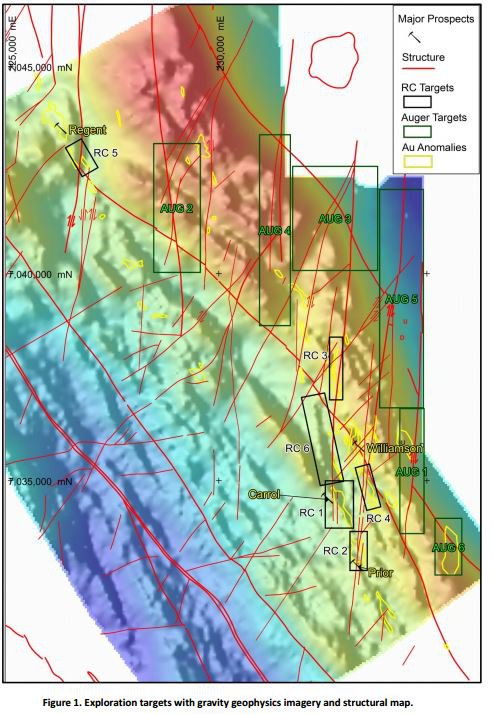 Follow up activities will include aircore and reverse circulation drilling, with multi-element analysis to boot.

BLK managing director Bryan Dixon told shareholders that it could be an exciting area.

“Blackham is very encouraged by the anomalies identified in the gravity and seismic survey,” he said. “The Lake Way area is a very large free milling gold system with exploration in the past...masked by the lake sediments.”

He said while a total of 92,000m of air core drilling has proved there is a mineralised system in the area, BLK has only completed 5000m of reserve drilling into Williamson.

This has been the only drilling at Lake Way in the past 9 years.

The news comes off the back of revelations late Friday that it had effectively locked in 20,000 ounces of sales gold at $1701 per ounce, and a further 20,000 ounces at $1575/oz as a put option. The sales have expiry dates of 2 and 9 August respectively.