A 10,000m RC and diamond drilling program has begun at Birimian Limited’s (ASX:BGS) 100% owned Goulamina deposit in Mali, where two drill rigs are currently busy putting holes in the ground with the aim of rapidly extending and upgrading the high-grade resource.

The move to commence drilling comes off the back of an impressive maiden JORC compliant mineral resource estimate at Goulamina, announced to the market in October with 15.5Mt @ 1.48% Li2O for 229,000t contained Li2O.

These initial results place the Goulamina deposit as one of the highest grade, hard rock lithium deposits of significant size in the world.

Now, before we go too far, it should be noted that for political and social reasons, this is a very high-risk stock. Getting mining projects up and running in countries such as Mali is no simple feat, and there may be challenges ahead. 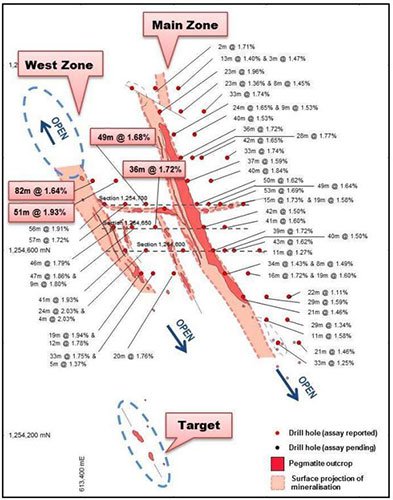 Significant potential exists for the maiden resource to be expanded and improved upon through the current 10,000m drilling program, particularly at the West Zone (see image above) where wide and high grade mineralisation remains open along strike near surface and at depth.

Spodumene bearing outcrops to the south of the deposit also offer potential for further discovery of a mineable deposit.

The current drilling program is expected to be completed in the beginning of the 2017, with initial results likely to be announced in the coming 2-3 weeks.

A scoping study is also underway to define key parameters required that will underpin feasibility study and first ore reserve estimates at Goulamina.

BGS is in a strong financial position to fund these activities, with $7.8M in cash reserves reported at the end of October 2016.

An update on the resource estimate is likely to come soon after, expected to be finalised around March 2017.

At this pace the market could potentially see a pre-feasibility study out on Goulamina early next year.

Test work previously conducted at Goulamina confirms the viability for the pegmatite to produce a high quality chemical grade lithium concentrate of 6.7%, with concentrate grades of 6% the typical quality grade sought by lithium carbonate producers.

Initial social and environmental assessment has been completed which will form part of the Environmental and Social Impact Assessment required to receive the mine permit.

The Bougouni project is in close proximity to a sealed highway, grid power and an abundant water supply, with the Selingue hydroelectric power station located some 45km to the north east.

As the Goulamina deposit is advanced we could see manufacturers in the market approach BSG for off-take agreements in order to shore up supply. BGS could become an attractive option for those requiring high-grade lithium concentrate in their manufacturing process.

Despite actionable plans in motion to advance rapidly, BGS is still an early stage explorer and faces the many risks companies of this nature face in the hope of bringing a deposit through to production.