Editor’s note: Birimian Limited is a very high risk stock. Getting mining projects up and running in countries such as Mali is no simple feat for political and social reasons, and there may be challenges ahead. You need to fully inform yourself of all factors and information relating to this company before engaging with it.

Birimian Limited (ASX:BGS) has hit broad zones of lithium mineralisation at shallow depth from its first reverse circulation drilling at its Bougouni project.

It has been drilling the Goulamina prospect at the project through a reverse circulation drilling campaign, with 42 shallow holes drilled.

The first five results have come back from the lab, confirming broad hits including 40m @1.84 lithium oxide from 10m.

The intersections were determined using an elevated cut-off grade of 1% Li2O.

BGS told its shareholders that the broad hits, even at this early stage, suggested that mineralisation could have low strip ratios and therefore would be amenable to bulk open pit mining.

The first five holes were drilled in the northern portion of the Goulamina main zone, which is a 700m long surface expression – with logging suggesting that the main zone is open along strike under shallow soil cover to the north and south of current drilling. 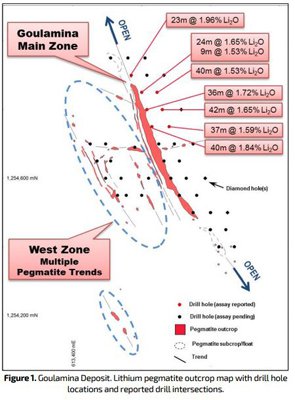 A map of BGS’ project in Mali

Previously it had said reconnaissance drilling had identified areas of mineralisation to the immediate west of the main Goulamina Zone, giving BGS a longer term target.

In addition, BGS is in the process of drilling 700m worth of deeper diamond drilling.

The plan at Bougouni is to target a resource of 15 million to 18 million tonnes at an average grade of between 1.8% and 2.2% lithium oxide.

The exploration target is conceptual in nature and is based on previous work done by mining consultancy CSA Global as part of a program funded by the World Bank aimed at stimulating the economy of Mali.

The drilling is being done to try and fast-track an initial resource estimate and a JORC Resource – which it has said would more than likely come before the end of the year.