Birimian Limited (ASX:BGS) has found a new zone of lithium mineralisation at its flagship Bougouni project – and it could add “additional resource tonnages”.

It released the next set of drilling results to its investors today, following up on both the Goulamina main zone and Goulamina West – previously identified on technical work.

The high grade and broad hits from reverse circulation drilling at the West zone included:

BGS said it was pleased by the drilling, saying the new discovery had the potential to “significantly expand[s] scope for additional resource tonnages.”

While the West zone drilling is the headline, BGS continues to firm up its prospects at the main zone, with the latest results confirming that high grade mineralisation continues for at least 700m of strike.

It said that given the “highly continuous nature” of the Goulamina pegmatite, it is quite possible will continue along strike and at “considerable” depth outside the present limits of drilling. 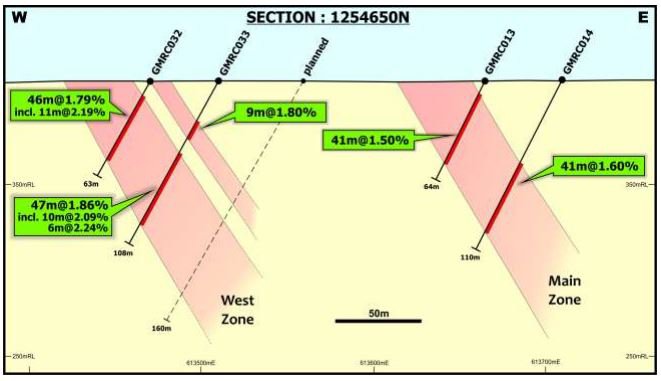 A cross section of the drilling

In other news, it said it would have a JORC-compliant resource in the bag by October.

This is yet to occur, so take a cautious approach to any investment decision you make with regard to this stock and seek professional financial advice for further information.

Interestingly, the project has a conceptual target of 15 million to 18 million tonnes at an average grade of between 1.8 and 2.2% Li2O.

The target was based on drilling and analysis carried out by CSA Global and funded by the World Bank aimed at finding resources which could stimulate the economy of Mali – where mining projects can be difficult to bring to fruition because of internal issues.

The drilling, however, is not JORC-compliant, meaning BGS needs to conduct its own program before putting together a resource.

It had previously said that a resource would come before the end of the year, but today’s release narrows it down to October.