Birimian Limited is a very high risk stock. Getting mining projects up and running in countries such as Mali is no simple feat for political and social reasons, and there may be challenges ahead. You need to fully inform yourself of all factors and information relating to this company before engaging with it.

Birimian Limited (ASX:BGS) has gone deep at Bougouni and come back with “spectacular” results.

The ASX-listed lithium play told its shareholders in a note today that diamond drilling done on the northern part of the main Goulamina deposit confirmed lithium-bearing pegmatite at depth.

To date, five of eight planned diamond holes have been drilled, but those drilled so far have found “spectacular zones of densely crowded spodumene”.

Those zones were hit in three of the holes drilled up dip – deliberately drilled to try and come up with a resource estimation for the Goulamina deposit.

While the estimates are visual in nature, corresponding holes as part of a previous RC drilling campaign returned intervals including 18m @2.1% lithium oxide, within a 50m zone with an average grade of 1.62% Li2O. 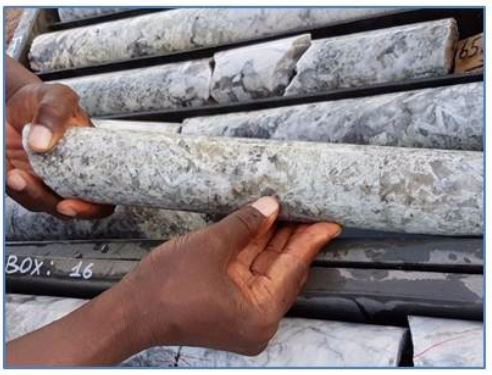 A sample of core taken from diamond drilling

The Goulamina main zone remains open to the north, with BGS saying that there is “good potential” to extend the zone north with more drilling.

One diamond hole in particular confirmed that there was broad and continuous mineralisation of more than 150m down dip from surface.

Three more step-out holes are due to be drilled, with analytical results from drilled holes set to drift in over the coming weeks.

The plan at Bougouni is to target a resource of 15 million to 18 million tonnes at an average grade of between 1.8% and 2.2% lithium oxide.

The exploration target is conceptual in nature and is based on previous work done by mining consultancy CSA Global as part of a program funded by the World Bank aimed at stimulating the economy of Mali.

The drilling is being done to try and fast-track an initial resource estimate and a JORC Resource – which it has said would more than likely come before the end of the year.