Shares in AusQuest Limited (ASX:AQD) have doubled since March, but there could be more upside to come with the company flagging today that it is poised to commence drilling potential gold-copper targets at the Gunanya Project in the Paterson region of Western Australia.

This has been approved under its Strategic Alliance Agreement with South32 (ASX: S32).

A reverse circulation (RC) drilling program consisting of 6 to 9 drill-holes for a total of approximately 1,800 metres has been agreed in order to provide an initial test of three targets defined by magnetics.

This will assist in determining their potential to host large-scale gold and copper mineralisation, similar to that found at Winu (by Rio Tinto) and Havieron (by Newcrest).

Modelling shows that the targets occur at shallow depths (50 metres to 100 metres) and are large in size, up to one kilometre wide and extending over strike lengths ranging from one kilometre to five kilometres.

At least two RC drill holes (200 metres apart) are planned over each of the three targets with the potential for further drilling to be undertaken subject to results.

Drill holes are planned to test down to depths of approximately 200 metres. 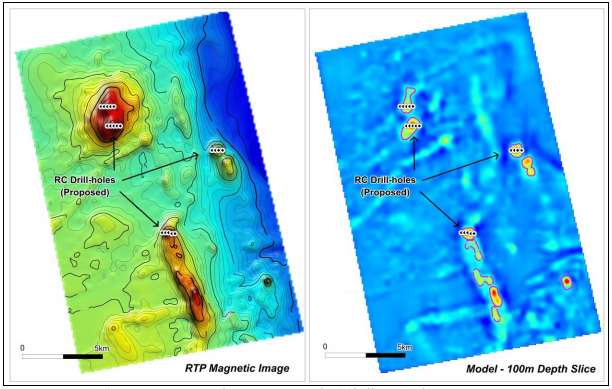 Heritage Clearance surveys for a total of 19 drill sites are scheduled for late August following an initial access site visit in July.

Drilling is being planned for the September/October period, subject to receipt of all necessary clearances and the availability of drill rigs.

AusQuest managing director Graeme Drew underlined the significance of recent success in the Paterson Region saying, “The plan for early drilling of the Gunanya targets is a significant step forward in determining the potential of the project to host major gold and/or copper mineralisation similar to that found at other recent discoveries in the region.

“The Gunanya Project has several compelling targets based on analogies that we are able to draw with new discoveries in the Paterson Region from both a gold and a copper perspective.

“Drilling is the ultimate test of any target, and we are excited to be able to drill early in the exploration process at Gunanya.’’