AusQuest Limited (ASX:AQD) has kicked off the week with some promising newsflow from its operations in Peru, and this comes on the back of last Thursday’s announcement that the group had identified the potential for both base metals and rare earth elements (REE) in the Fraser Range Province of Western Australia following a review of recent and historical drilling at its Balladonia Project - more on that later.

On Monday morning the company’s shares opened 10% higher after management announced that 24 of the rock chip samples collected at its Parcoy prospect contained in excess of 1% copper.

Many of these samples occur in andesitic volcanics, similar to the volcanics that contain copper mineralisation at the company’s Cerro de Fierro Project, located approximately 50 kilometres to the south-east, suggesting similar iron-oxide copper-gold mineralisation may be present at Parcoy.

Anomalous copper values within the volcanics are associated with a range of indicator elements, defining at least two priority target areas along the prospective north-west trending structure, each covering several square kilometres in size. 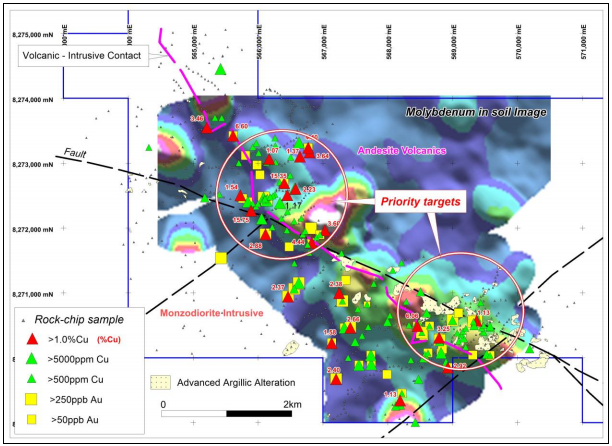 Management has completed base-line environmental and archaeological surveys and it is in the process of submitting drill permit applications to government for the preparation of twenty drill pads in the area.

Final drilling approval for Parcoy is expected during the September quarter of 2020, subject to delays being caused by the COVID-19 pandemic.

Results from recent diamond drilling at the Telegraph Prospect, part of AusQuest’s aforementioned Balladonia Project, together with a review of earlier drilling results from the Canterbury prospect, has indicated the possibility of wide-spread carbonatite activity within the project area.

Carbonatites are a type of igneous rock which is a major source of rare earth elements (REE) worldwide.

Assay results from the recent diamond drilling program (four drill-holes for 980 metres) at the Telegraph Prospect have confirmed the presence of a carbonatite intrusion with a layered sovite core beneath the silica-clay alteration intersected by the earlier air-core and reverse circulation (RC) drilling.

A detailed assessment of all geochemical data suggests the source of the base metal anomalism within the silica-clay alteration has not been intersected by the diamond drilling.

The company now believes that base metal mineralisation occurs to the south and east of the current drilling, below the anomalous copper, silver and zinc values that occur within the silica-clay alteration zone near the eastern margin of the target.

Further drilling under the Strategic Alliance Agreement with South32 (ASX: S32) will be considered once all the data have been fully assessed.

Commenting on developments in relation to the Balladonia Project, managing director Graeme Drew said, ‘’The discovery of carbonatite activity within the Balladonia region was an exciting new development for the Fraser Range region which would provide new exploration opportunities for the company.

“It’s important to remember that developing a solid understanding of geological context and what it means for discovery potential only comes from drilling - and drilling activity is still at a really early stage in this region.’’