AusQuest Limited (ASX:AQD) has intersected a carbonatite intrusion in the course of diamond drilling at the Telegraph Prospect, part of its Balladonia Project in the Fraser Range area of Western Australia.

Management explained that this lies beneath the intense weathering/alteration that was reported from earlier air-core and reverse circulation (RC) drilling.

The Balladonia Project is subject to the company’s Strategic Alliance Agreement (SAA) with South32.

Carbonatite complexes are a major source of rare earth elements (REE) world-wide and are also known to contain base metal mineralisation (copper).

The discovery of a carbonatite intrusion/complex at the Telegraph prospect is considered to be the likely cause of the anomalous REE’s and base metals found within the weathered/altered profile.

Drill core samples have been submitted for analysis and assay results are expected within the next three to four weeks.

A full assessment of this prospect and its regional implications will be completed once full assay data has been received.

The diamond drilling program consisted of four drill-holes for a total of 980 metres on two sections located 200 metres apart as indicated below. 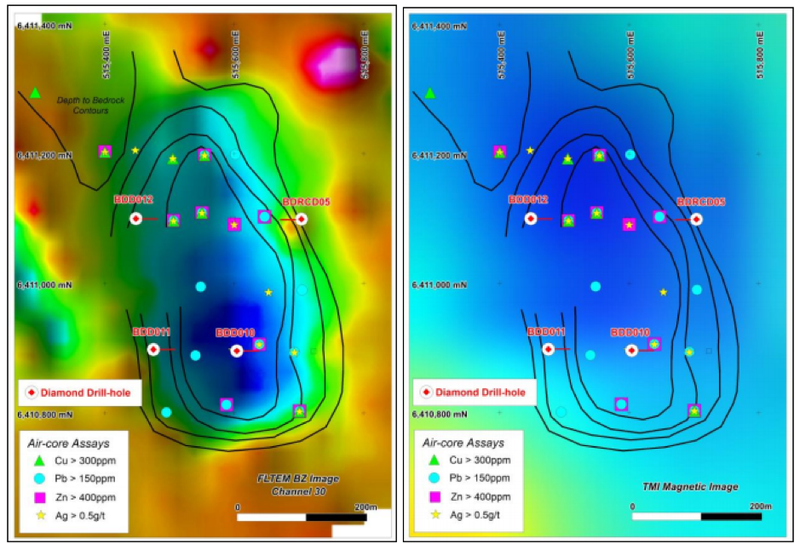 The planned program (six holes) was suspended at the completion of the fourth drill-hole to allow personnel to return home prior to a possible statewide shut-down due to the Covid-19 virus outbreak.

The diamond drill program was designed to test beneath anomalous base metals (copper, lead, silver) and rare earth elements (Ce, La, Nb, and Y) that occur within intense clay/silica/pyrite alteration/weathering intersected during the earlier air-core and RC drill programs.

The carbonatite intrudes a mixed sequence of felsic and mafic gneisses, typical of rock types generally found within the Fraser Range region.

From a geological perspective, alteration associated with the intrusion extends into the gneisses, making them either highly siliceous and/or potassic altered.

The upper contact zone of the intrusion appears to be intact on the southern section at a depth of approximately 150 metres, suggesting that it did not breach the surface and may be younger than the enclosing rocks.

Discussing the significance of this find, managing director Graeme Drew said, ‘’The discovery of a carbonatite intrusion was a new development for the Fraser Range region of Western Australia and could provide new opportunities for the company.

“While this is an unexpected development and we are yet to fully understand its implications for our exploration at Balladonia, it is important to remember that carbonatites are highly sought-after world-wide for their rare earth potential and also for base metals.

“We are aware of other prospects within the Balladonia Project with similar signatures to the Telegraph prospect, and we will be re-assessing them in light of this result.”

AusQuest will be reporting assay results from the diamond drilling program over the coming weeks after fully assessing the data and its implications for further exploration in the region.