Thick sections of the black mudstone were found to contain anomalous levels of zinc (up to 1.3% Zn), copper (up to 0.23% Cu), silver (up to 17gpt Ag) and thallium (up to 17ppm Tl), along with elevated gold values (up to 0.177gpt Au) throughout parts of the sequence.

The following table shows the anomalous base metals that were identified across various intervals.

The anomalous base metal intersections are partly associated with elevated levels of molybdenum, vanadium, sulphur, and phosphorous which are commonly found within black carbonaceous sediments that are favourable host rocks for sediment-hosted zinc mineralisation.

The carbonaceous mudstones intersected at Tangadee are similar to those found in the north of the prospect where historical drilling has reported similar intersections of zinc, silver and copper.

This suggests that the metalliferous sediments in this region could be very extensive, extending over a strike length of at least 20 kilometres. 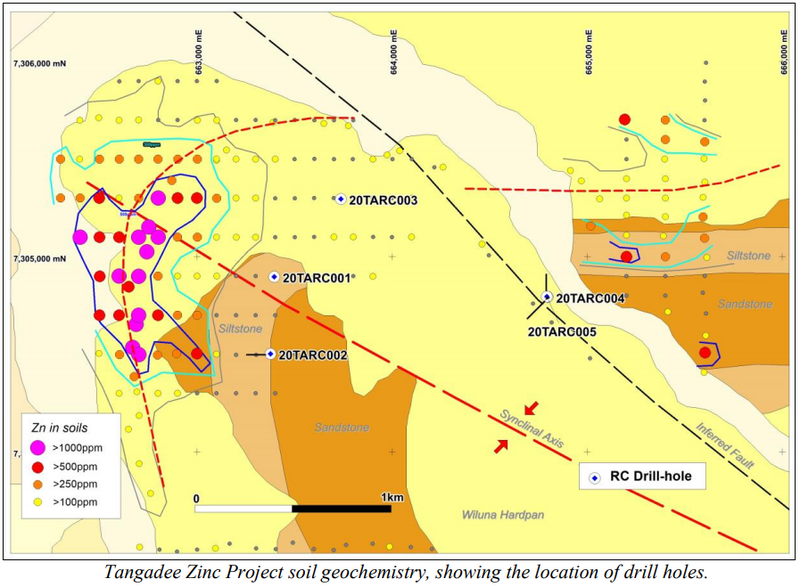 Establishing targets with increased grades within the carbonaceous sediments is currently being considered under AusQuest’s Strategic Alliance Agreement (SAA) with South32 before a decision is made on the future of this project.

AusQuest’s managing director Graeme Drew emphasised that the wide-spaced drilling at Tangadee had provided further insight into the prospectivity of the region, even though the drilling had not been successful at this stage in identifying targets where higher metal grades were more likely to occur.

On this note, he said “Exploration for sediment-hosted zinc within the Edmund Basin is still in its infancy and remains an elusive target.

“Technical meetings under the SAA to discuss these results are scheduled for December, at which time a decision on the future of this project will be made.”