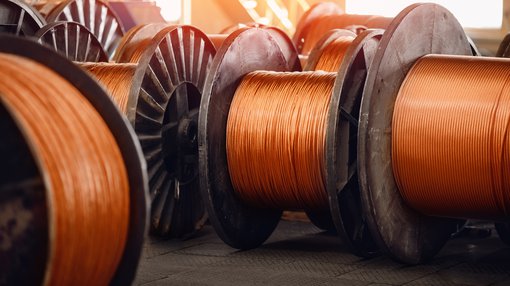 AusQuest Limited (ASX:AQD) has provided a promising update on the Stage 2 scout diamond drilling program, which commenced in late November at the Cerro de Fierro Copper Prospect in southern Peru.

Exploration is being conducted under the company’s Strategic Alliance Agreement (SAA) with South32 (ASX:S32).

The program was completed in early February 2020 with a total of seven drill-holes for 3,200 metres drilled as part of the ongoing assessment of the IOCG (iron oxide copper-gold) prospect.

Final assay results have now been received and will be assessed over the coming weeks.

Significantly, copper mineralisation was intersected in every drill-hole except CDFDD010, which for drilling reasons was terminated at 366 metres above the target zone.

These results were from drill hole CDFDD14, which as you can see below is relatively central to the main zone being targeted, and lies just to the south. CDFDD09 which was terminated in the mineralised zone lies just to the west of CDFDD14, and it returned 21 metres at 0.3% copper, 0.14g/t gold and 2.4 g/t silver within the lower portion.

Returns of 6 metres at 0.2% copper and 0.6g/t silver in the bottom hole samples from CDFDD12, imply that the mineralised system could extend more than 500 metres west of hole CDFDD09.

From a geological perspective, drilling has confirmed the widespread distribution of copper within the andesitic volcanics, which are the preferred host rocks for mineralisation at Cerro de Fierro.

The mineralised andesites do not outcrop within the drilled area, occurring at depths ranging from approximately 75 metres within CDFDD11 to in excess of 450 metres in CDFDD12.

The copper mineralisation is open in all directions and appears to be shallowing to the south and deepening to the west.

Strong copper anomalism (greater than 1.0% copper) identified in rock-chip sampling to the south of the current drilling suggests that the prospective andesitic host rocks outcrop in this area, providing a high-priority target area for future drilling.

Permitting to drill test this area was initiated late last year, with an official application lodged with the government in December 2019.

The drill permit is expected to be approved around the middle of 2020 with drilling set to start shortly thereafter.

The following map highlights the widespread copper which lies to the south of the area where drilling has just been completed, and it also shows the new priority area that management intends to target. 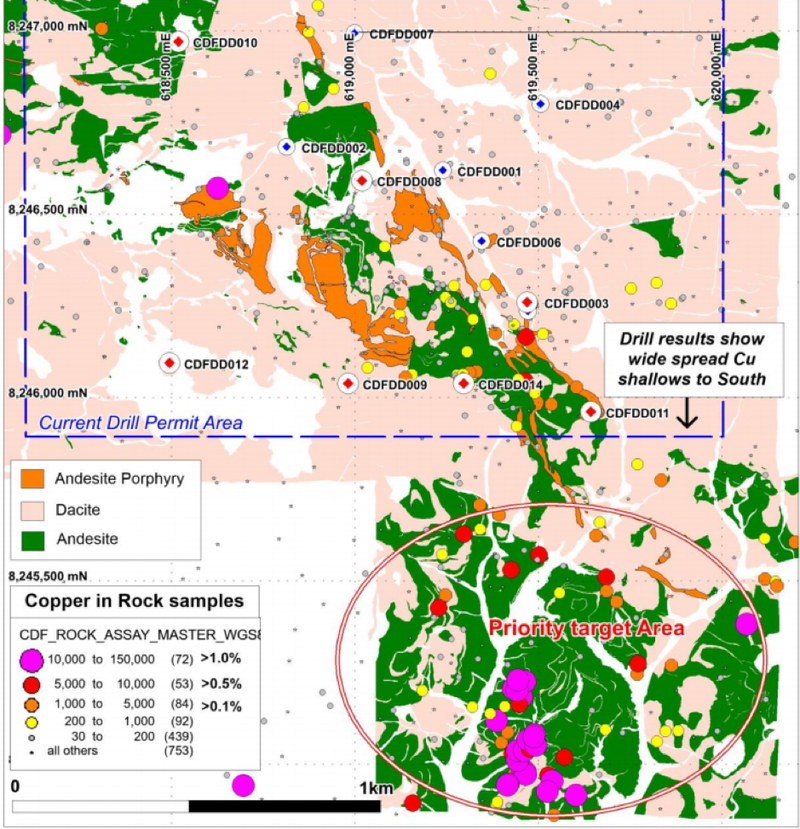 Importantly, the geological structures and associated minerals associated with the copper mineralisation delineated to date are typical of other IOCG type deposits in the region.

Taking this into account, Drew said, “A clearer understanding of the controls and distribution of copper and gold mineralisation is now emerging, as is the large size and scale of the mineralised system(s) present at this prospect.

“We are continuing to evaluate the data we have collected but recognise that shallower, higher grade copper (+/-gold) needs to be delineated before the full potential of this prospect is known.’’

“The area immediately to the south of the current drilling has been highlighted as a high priority target area on this basis, and plans are already in place to drill test this area under the SAA, as soon as the appropriate Government permits have been received.”