This is being conducted under the group’s Strategic Alliance Agreement (SAA) with South32 (ASX: S32).

A minimum of four reverse circulation (RC) drill-holes will be completed for approximately 1400 metres to test for sediment-hosted zinc mineralisation similar to that found in north-west Queensland (the Mt Isa Belt).

Shallow sedimentary dips as indicated below were recorded in the area, suggesting there is potential for shallow zinc mineralisation to occur over an area of several square kilometres within the core of the syncline. 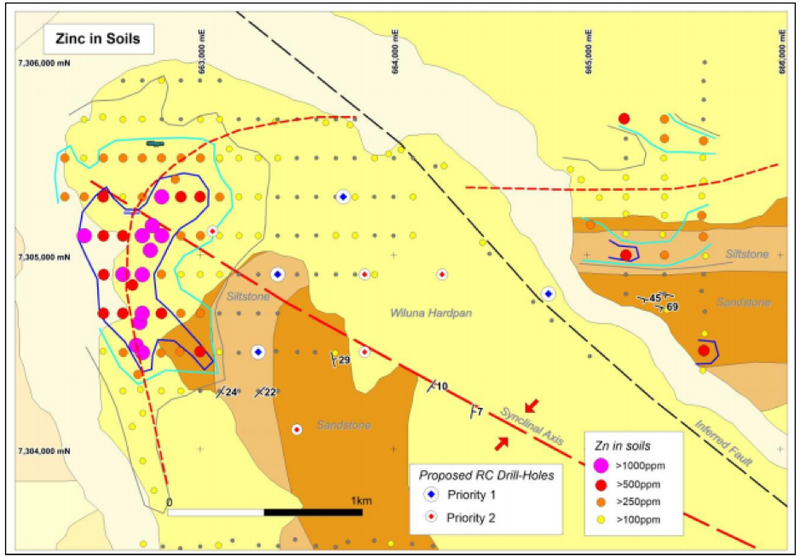 The initial drill-holes are widely spaced (at least 400 metres apart) as they are designed to test down-dip downdip and/or down-plunge of the large zinc anomaly found at surface.

The drill program is expected to take approximately two weeks to complete, with assays available within four weeks of completing the program.

AusQuest’s managing director Graeme Drew highlighted that the commencement of drilling at Tangadee followed the recent start of its first drilling programme at the Hamilton Copper Project in north-west Queensland.

Discussing Tangadee and the company’s broader exploration program, Drew said, “The RC program at Tangadee will be the first of several programs we hope to complete in Western Australia during the second half of 2020 looking for base metals and gold.

“Heritage surveys to clear access for drilling at our Gunanya Gold-Copper Project in the Paterson Province of WA are currently being completed, and we hope to be able to commence drilling there within the next couple of months, subject to rig availability.”